Why can't we protect our peoples? 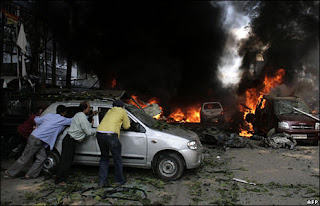 The serial blast in Assam today is one the deadliest in this North-Eastern state of India. Assam has seen many violence in the past, but something like this is unprecedented.
When I heard about it first after news started to spill in the Internet, the first reaction was of shock. By the time I recovered, I started calling my sister who works in Guwahati. This must have been the state of mind for many of the family members.
The point is, the government had enough indication that this was coming. Situation has been tensed for quite some time in Assam lately and the government had enough reasons to stay tight guarded. But looking at the scale at which these blasts have happened (last news says >60 dead and >300 injured), looks like the government has been caught napping. How can they allow such devastation to happen. This is a pure case of negligence leading to death.
All I can feel now is frustrated and unsafe. What has happened could have been avoided, and what the government can do now is get those culprits and bring them to justice.
We want peace, everyone wants peace. I beg the government to protect my people from all these dangers.
Posted by Atanu at 7:37 PM