Trek of a lifetime @ Achensee:

Thursday, 17th March 2011: Its lunch time in office and Marc (my colleague working in GE Jenbacher Austria) and I was talking about the beautiful weather. He suddenly proposed we should go for a hiking trip on the mountains near his home; and I readily agreed. We decided to do it this coming Sunday. I informed my India colleagues about this plan and they also jumped in. So we were ready for some real action for Sunday.

Sunday, 20th March 2011: It was a bright Sunday morning and I got quickly freshened up, finished my morning duties, and headed for the breakfast. To stay afresh until afternoon, I filled up my stomach completely. I filled my backpack with some eatables and fluid for the trek. All of us got together and moved towards the railway station. Informed Marc when we boarded the train to Jenbach. 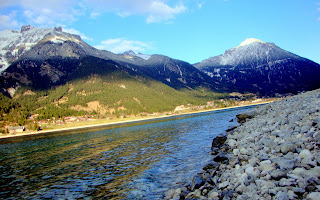 Jenbach is ~ 25 minutes of train ride from Rum. Train ride from Rum to Jenbach is really scenic with great view of the Alps. You can see the Schloss Tratzberg castle just before reaching Jenbach. When we reached the station, Marc was already waiting for us. We jumped into Marc’s car and started our journey to Achensee Lake. It was around 15 minutes ride through a curving road. The Achensee is a lake north of Jenbach in Tyrol, Austria. Marc parked his car at his home and we took a walk down to the lake. It was breathtaking view of the lake between the mountains. We also saw the railway station for Achenseebahn (http://www.achenseebahn.at/en/home.html). Achenseebahn is operational during summer (starting in May) which carries passengers from Jenbach railway station until the lake by a steam engine driven coach. After walking few distance on the tar road, we moved towards the hiking trail. 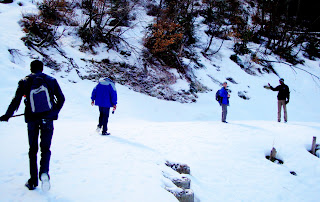 It was just beginning of our trek uphill and the trail was already covered with snow. This gave an indication of what awaited us ahead. The snow was hard and walking on it was not very difficult, but fun. As we started moving upwards, the views started getting better. We started getting full view of the lake, which looked much bigger and much blue from this height. We kept walking with some brisk breaks, regaining our energy, and also capturing the moments in our camera. It was clear blue sky and the lake looked beautiful between the snow clad mountains. After some time, we were completely surrounded by snow. The route had marks of deer foot on the snow, suggesting their presence in those mountains. 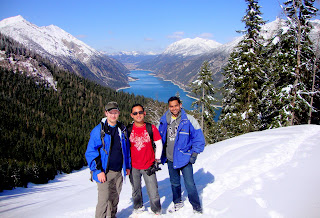 We reached a place which had a sharp vertical slope full of ice. On inquiring Marc informed that we are actually crossing a skiing route. There were few skiing marks suggesting somebody must have already passed by it. It was snow all around now, and the worse part, it was getting softer. We left the hiking trail and now had to walk straight up the hill beside the skiing route. It was steep, and really scary, as the soft snow started slipping below my feet. We walked for a small distance after which we left this sharp hike. Now it was walk through the trail left by some earlier hikers. The snow now got really deep and soft. We started falling on the knee depth snow quite frequently. It was my first experience walking on so much snow. It felt like walking on very soft sand which kept slipping away as soon as I keep my foot on it, and the energy required for each step amplified. It was fun to see everyone falling down on their knees quite frequently. I just had my normal sneakers on (big mistake) where snow has already sipped in wetting my socks. The shoes were also wet and my legs froze. Marc kept telling that the peak was nearing but it felt really far. After some distance the snow became harder. It became much easier to walk, and we knew that the peak was near and the worst part of walking on soft snow was over. The peaked seemed nearer now, and after few more minutes of walk, we were there. It was almost 3 hours of trek with fun all the way (though the feet’s were really cold by now). Picture time… 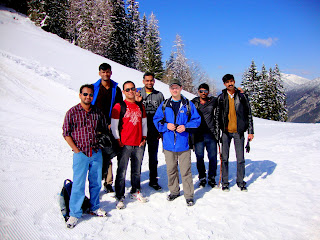 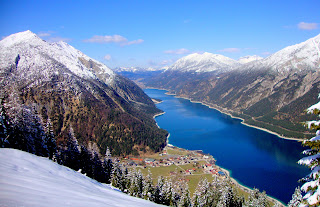 Marc took us to a place where we got the most awesome view of the lake. There were many people now at the peak, most of who came there for skiing. There was a ropeway which also carried tourist to the peak, passing by the awesome views of the Alps. Everything was beautiful everywhere, and took some time out to enjoy the view.

We were feeling really hungry now. There was a restaurant at the top and we quickly settled in. it was quite sunny now and we took one table out in the open, with great view of the snow clad mountains in front of us. Time to grab some food, and we started gulping in. Marc informed that we will be taking a different route on our way back. The hike has already been a hit for us and we were hoping for some even better scenery on our way back. 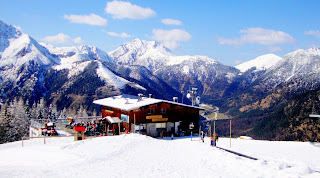 After an hour of break and a nice lunch we started on our descent. The route was surrounded by nice view of pine trees covered with a sweet layer of snow. Descent took away less of our energy and we could keep up with the speed, and enjoy everything around. This route had a nice closer view of the mountains. After some time the trail became small passing beside the mountain, reminding me of my exciting bus journey to my college in Arunachal. The route passed through couple of tunnels cut through the mountain. There was ice formation on the tunnel from drooping water, which solidified to form the beautiful structures. We finally reached a place where Marc said he would come down frequently to read his novels. It had a small bench to relax with great view of the mountains. I just felt jealous :-) 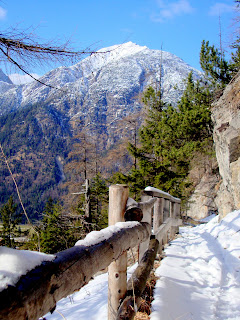 We took a short break and then continued on our descent journey. The lake started to show up, reminding us of its beautiful presence. The snow started reducing and walking became much easier. The descent was quick and we were soon walking beside Acehnese Lake. Few of us ran towards the lake to get a feel of its icy cold water. Took a last view of the beautiful lake and joined Marc to the return journey to Jenbach railway station in his car. We all thanked Marc for the great hiking experience.

It was almost dark by the time we reached out hotel. My feet felt numb and a hot shower was what I was craving for. After the nice shower jumped into my hotel bed to browse through the memories captured in my camera. What a day, something to remember forever.

Posted by Atanu at 3:23 AM 3 comments: Links to this post