I started running some 5 months back. I use the treadmill in my office gym. Though I am not so regular, I have tried to keep my gaps small enough to claim I have continued. It started with small tired runs at the beginning of my running expedition and improving myself with time. I haven’t seen my physique change for any better, though my stamina improved.

I run for short distances in the treadmill, usually getting exhausted in the beginning, but comfortable after the body gets used to it. Never get a chance stretch myself, as there is a 15 mins time limit at the gym treadmill, so that all peoples get equal chances. I have always seen lesser crowd on Fridays, and started stretching myself to run longet time in some of these days to see if I can go further. Running at a slower pace then usual, I was able to stretch myself to longer time.

Couple of weeks back I decided to take my run to the tar roads of Bangalore. So measured a route besides the airport (I live near the airport) of about ~10 kms long. One fine morning I woke up early at 5:30 am (I hate to wake up early), and started my run in the pre-decided route. I started taking deep breaths just after I started, but soon the body got used to it. To my surprise, I completed the 10 kms of run without stop, and I was genuinely satisfied.

Yesterday I went for the second time, despite hating to wake up early. It was again a 10 kms run. After doing it second time, I felt confident enough of repeating the same distance again if required. The same evening I was talking with my roommate and during the course of discussion the Bangalore marathon topic popped up, and the though of participation came to my mind. It’s a chance to test the limit of my distance running.

Woke up early next morning and took my bike headed towards Kanteerava stadium, from where the Marathon will start. Registered myself for the half marathon and received my chest no (#1008, wow already a 1000 participants). First, it was the full marathon that started. The full marathon had ~ 300 participants (my smart guess looking at the crowd size). Half marathon started after that @ 6:30 am with ~ 1500 runners. I started jogging at my treadmill speed, knowing I had to finish at least 10 kms which was just half the way. The marathon started at Kanteerava stadium and the route followed was ->Cubbon Park -> Dr. Ambedkar road -> Cubbon road -> Ulsoor Lake -> Old Madras Rd. -> Byapannahalli R.S. At the railway station we have to turn and take the same route back, the station being the halfway mark at 10.5 kms. I saw peoples overtaking me wondering if I was running too slow, but didn’t took the chance of going faster and tiring myself before I get to the halfway mark. It was after 1-hr and 5-mins I reached the halfway mark. The organizers threw a violet color fluid in my shirt, it was probably for marking me for completing the halfway mark. I took the turn to take my route back. I saw peoples on their way to reach the halfway mark; well this means I did better then few peoples I guess. Not that slow, mmmm..

After the halfway mark I felt my body getting drained of its energy. After a couple of more kms, I had to take a short break. After walking some distance, I started running again. But I felt the energy level dropping and my legs not that fast any more. I started taking short breaks, and the breaks started coming frequently. I saw most peoples near me taking short breaks too. I didn’t wanted to quit at this point, like many others whom I saw putting up a run after breaks to make sure that the job is not half done. It was 5 kms left and I started thinking, this is one thing I will never ever do again in my life, with legs starting to get frozen. But I still kept moving on running and taking small breaks in between. I saw the banners of kms left counting down with time, and my energy levels kept me just going close to the finish. As I approached close to the stadium, I went for the final push and just started running. Entered the stadium with peoples cheering at all of us who just came in. I thought, GOD it’s done. But after entering I was told I had to make another full circle at the track before entering the finish line. Well, some more push, and I was finally at the finish line. I saw one organizer noting down my chest number, yes # 1008. After 2 ½ hrs of grueling fight of body vs. mind, finally the mind triumphed.

I was given a water bottle and I directly headed towards the grass, lying down with tiredness and satisfaction. Within 5 mins all my tiredness was gone and I was filled with joy of completing the job half planned. I had done something I have never done before; I had beaten my expectations. Well it feels so happy.

I was among more then 500 odd peoples that finished the half marathon, many of them kid’s. Luckily I was not the last one to finish, as I saw some peoples finishing after me. Good to see good running culture among Bangaloreans. 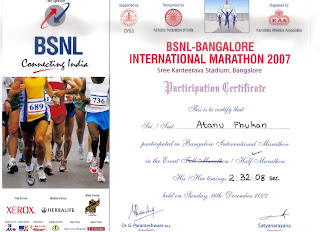 Added afterwards:
Today I received my certificate of completion. I finished the 21 kms with timing of 2:32:08, ranked 326. The runner who finished first had timing of ~ 1:04 mins. So I took almost 2 ½ times of what he took. May be I should try to better my timings in the next marathon.

Posted by Atanu at 7:59 PM No comments: Links to this post