I recently came across a video on TED where Matt Cutts (http://www.ted.com/speakers/matt_cutts.html) an engineer from Google talked about his life changing experience by experimenting with a 30 day challenge of trying something new.

It struck me instantaneously and I also thought of trying something similar myself. I thought starting with a 30 day photography quest will be a nice way to experiment with this idea. So come 9th January 2014, and I started my 30 day photography marathon J

Day 1 (9th January 2014)
This year has been one of the coldest winters for Bangalore. I wake up every day in the morning and look out through the balcony to judge how the day is going to be. This picture captures the view from the balcony overlooking the bamboo wind chime towards the new apartment building through a foggy outdoor. 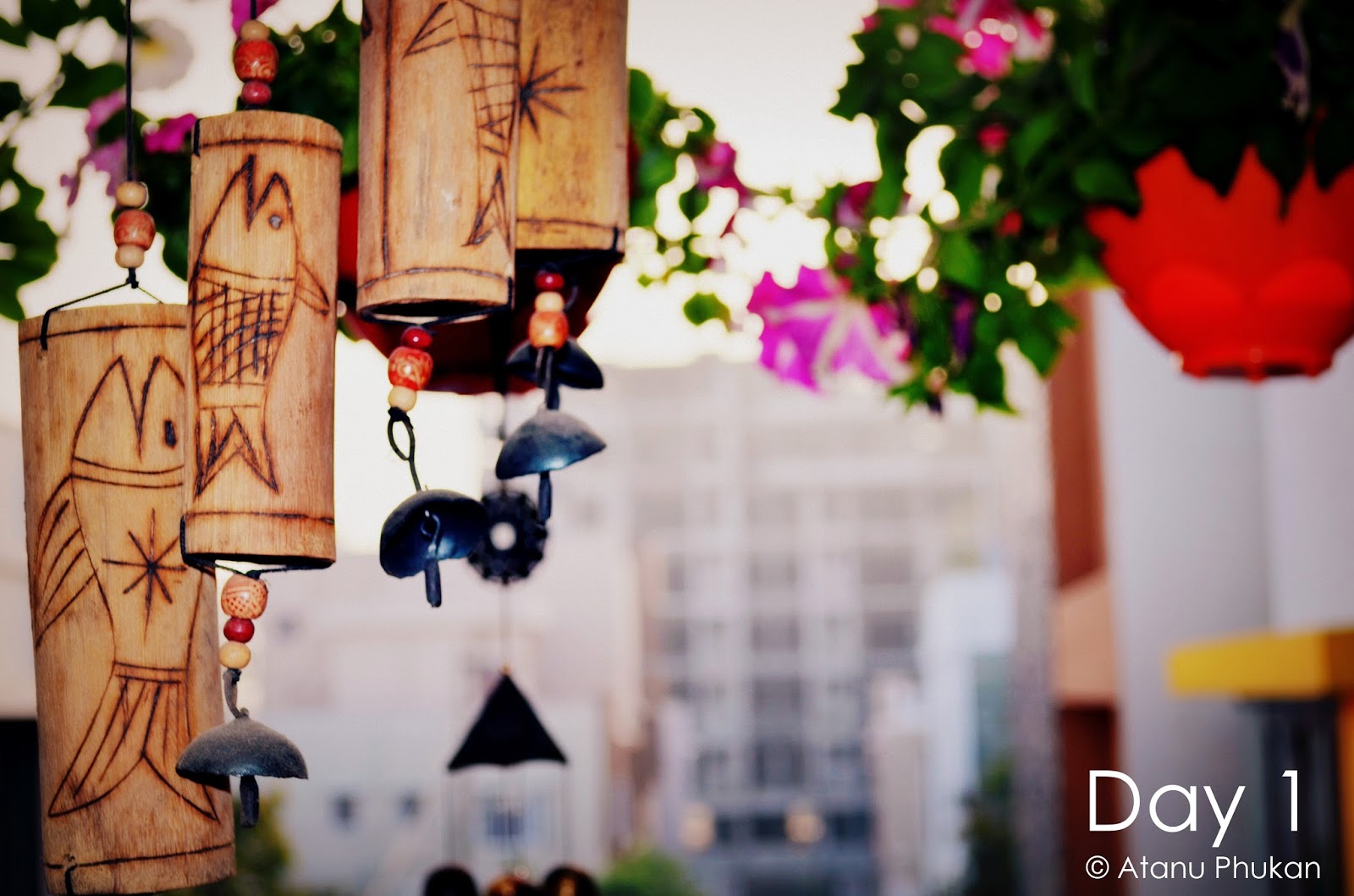 Day 2 (10th January 2014)
The neighborhood where I stay is newly developed. So there are quite a few construction projects happening around the area. A crane in one of the site is a "major attraction" for my 1.5 year old son, who is super excited to see the crane moving around while performing its job. Here is a view of the crane that can keep my son occupied for a quite long time. 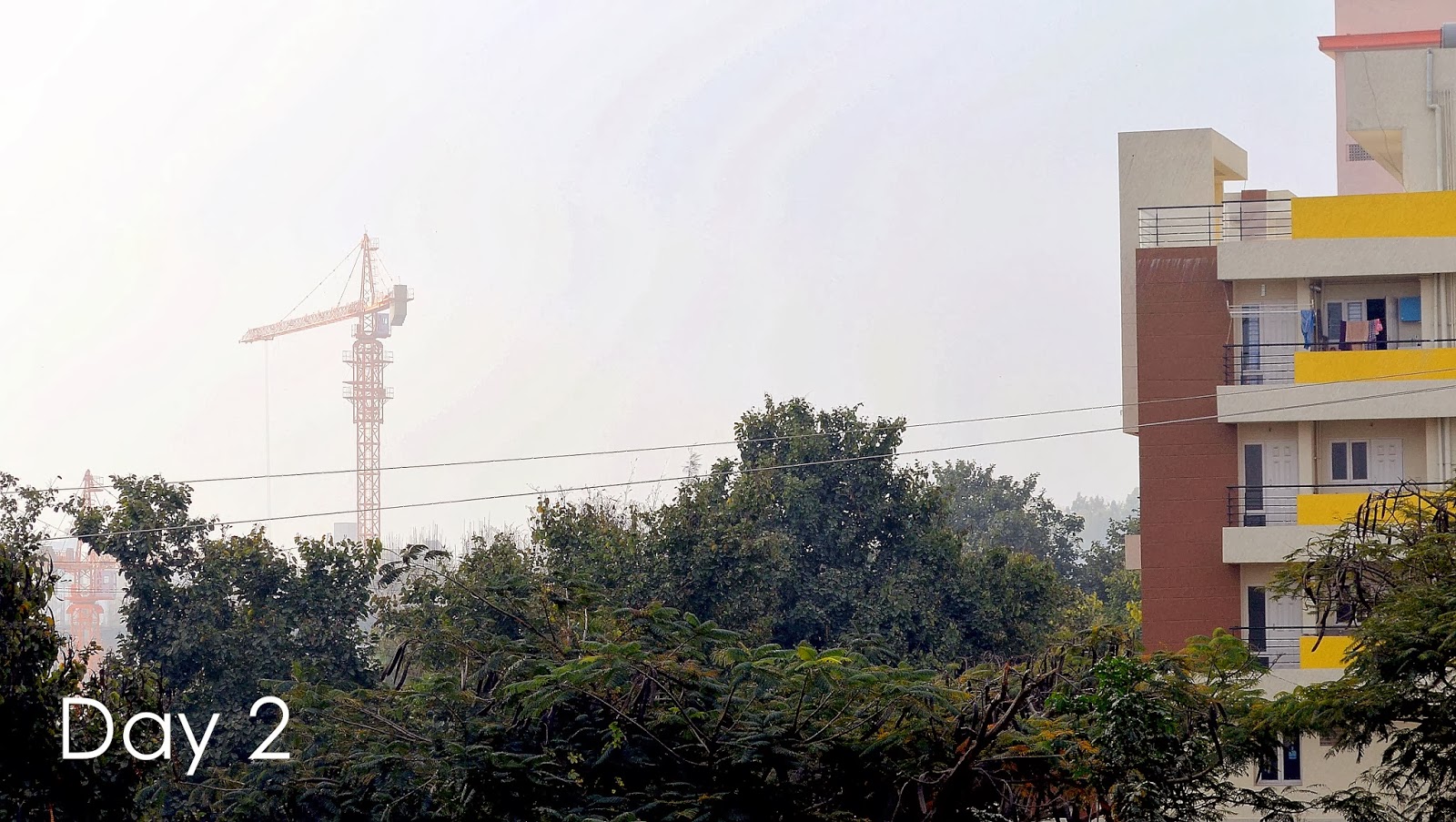 Day 3 (11th January 2014)
My mom loves gardening, especially flowers. So I had picked up some bit of that passion. I have tried to maintain a small garden of flowers that will enable me to practice my passion. This picture is of petunia flowers that are blooming at my balcony. 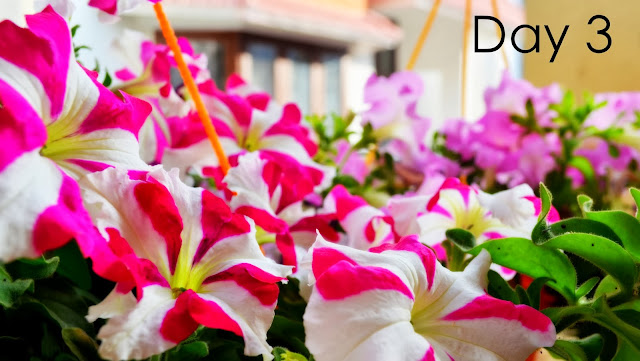 Day 4 (12th January 2014)
Visited the "Madiwala Market" today to get some stuffs for home. This picture captures a snapshot of how the market would look to a passerby. 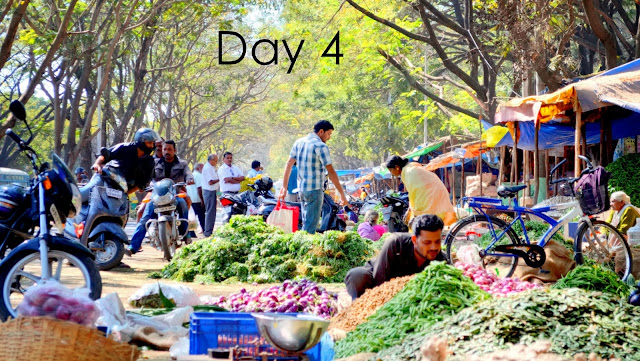 This is a picture of my son Yash playing with his toy car. This is one of his favorite truck gifted to him by my brother/bhabi. 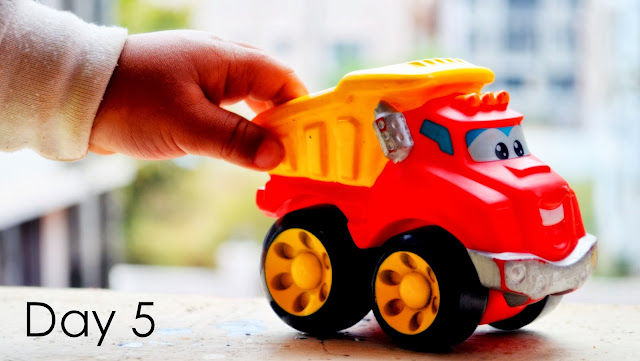 Today is Bhugali Bihu (http://en.wikipedia.org/wiki/Magh_Bihu) and we along with our friends set up a Mezi to be lightened in the morning. This picture captures my son Yash with his friend Aadarsh in front of the "mini mezi" that was created. Don't they look like some gang of street fighters :) 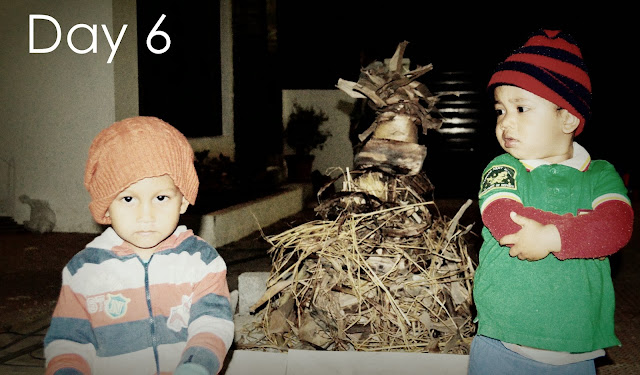 Surprise was awaiting me today morning. As I went to my terrace I saw a kite (bird) sitting at the top of my water tank. I wanted to seize the opportunity for an awesome capture and rushed down to grab my camera. By the time I was back, the kite had opened up its wings. This picture was taken of a flying kite. 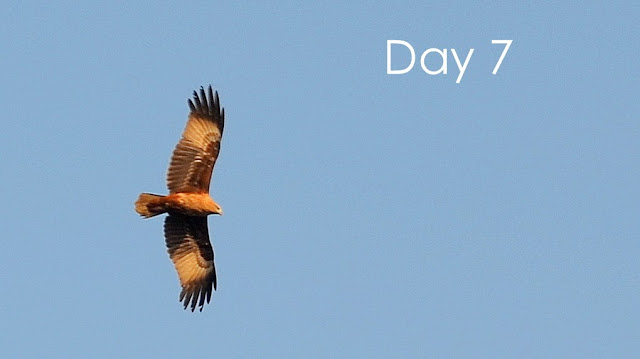 Though my neighborhood mostly comprises of individual houses, it have a fair presence of high rise apartment buildings. This picture shows the view of few high rise buildings as seen from my terrace.

It was spotted by my son two days back. Since then the butterfly has been a regular visitor to our balcony. This picture is taken when the butterfly was resting on one of the petunia plant. 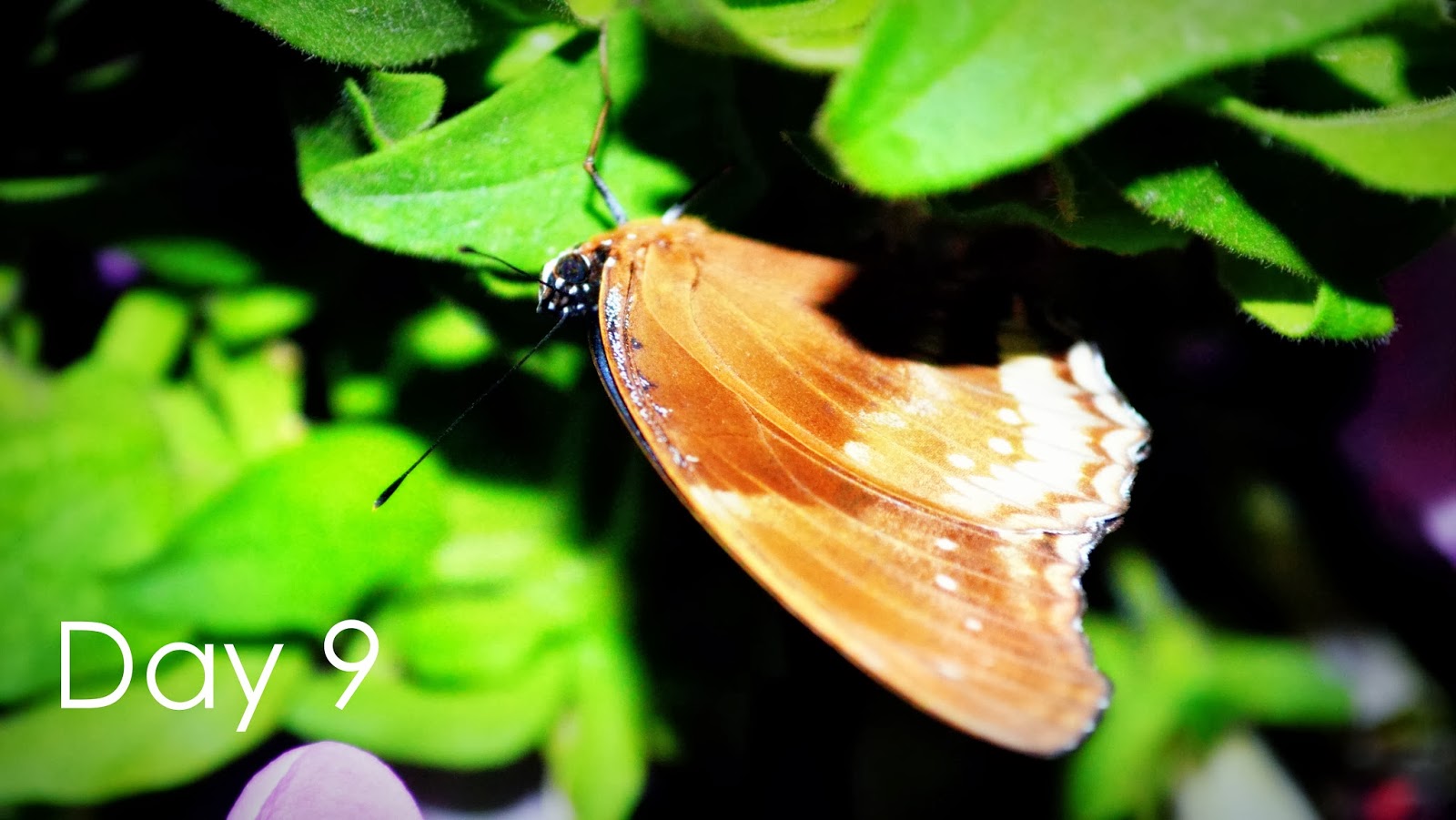 Unfortunately I do not use public transport in Bangalore. I either travel by my car, or take my bike. Today I had to take the bus to collect my car after servicing. I enjoyed taking the bus after a long time (may be because I had a place to sit due to weekend J) 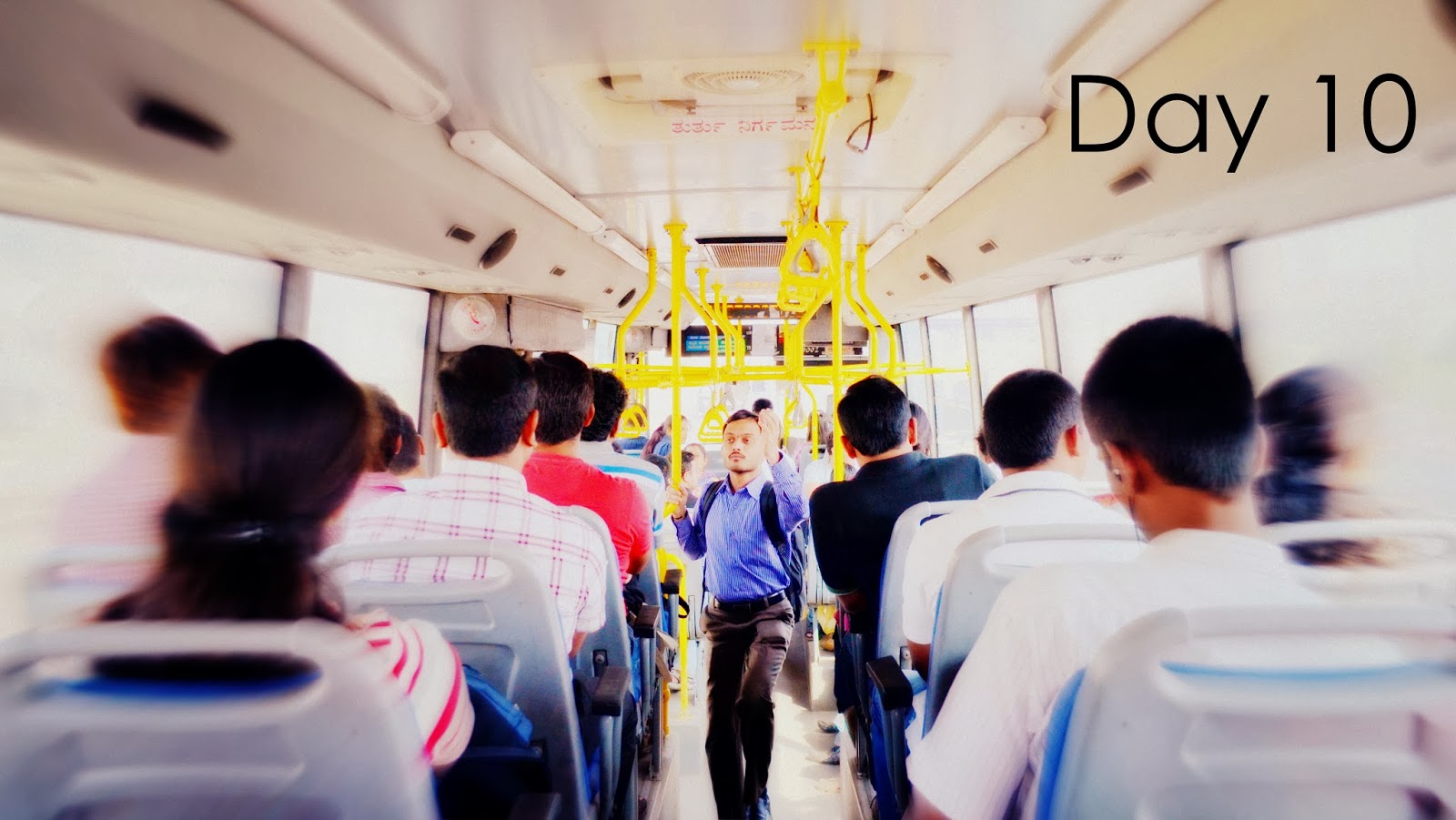 Our son Yash keeps exploring different places where he can get cozy and enjoy his tasks. This picture shows him in his new discovery, a bucket.  He is seen playing a game of car race in my mobile phone. 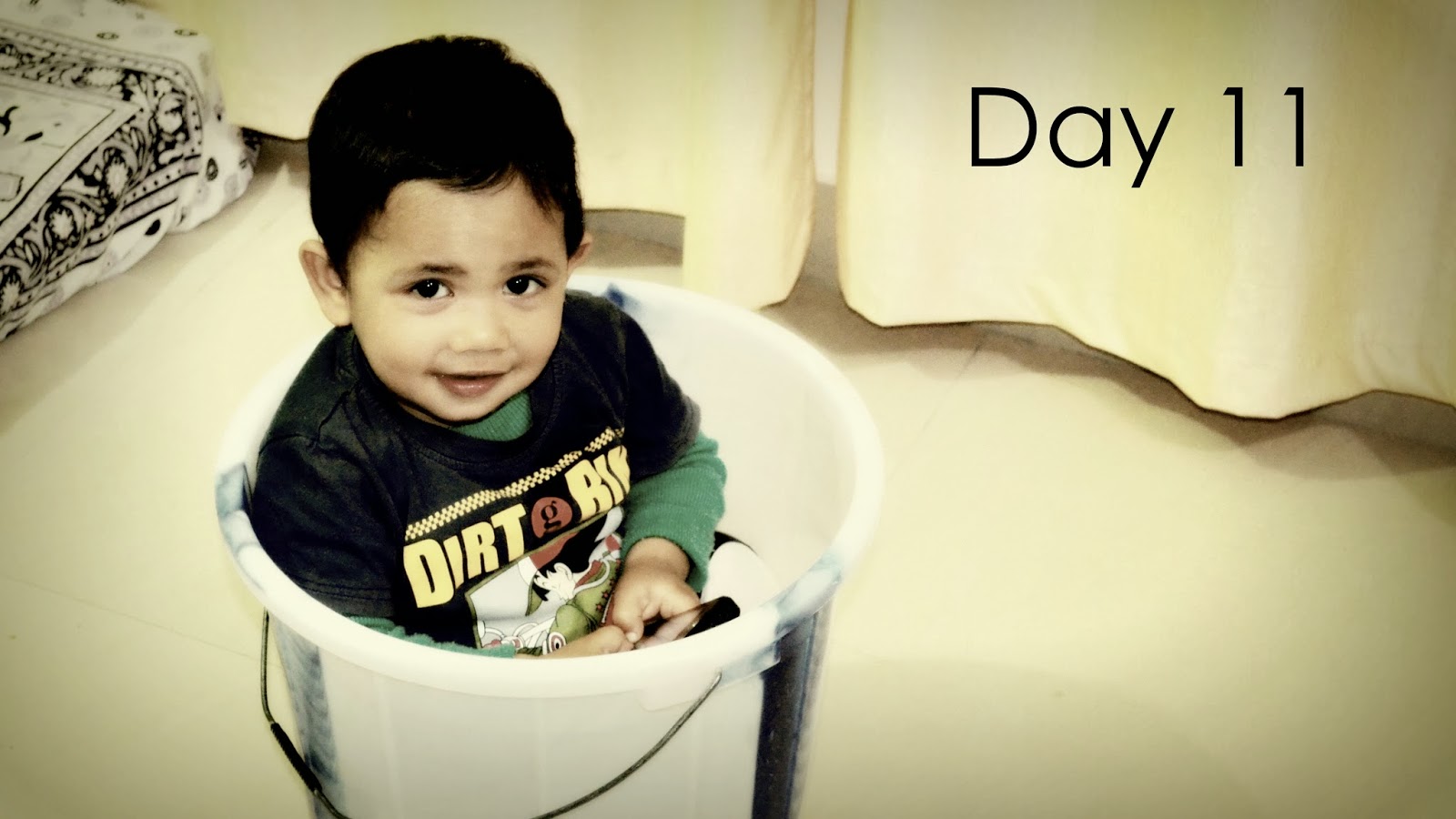 It’s an animal world. These are some of the toy animals of Yash, out of a bunch he has. He can identify all of them shown here and even name a few. While watching TV (NatGeo etc.), he loves to pick up the one he sees on screen. 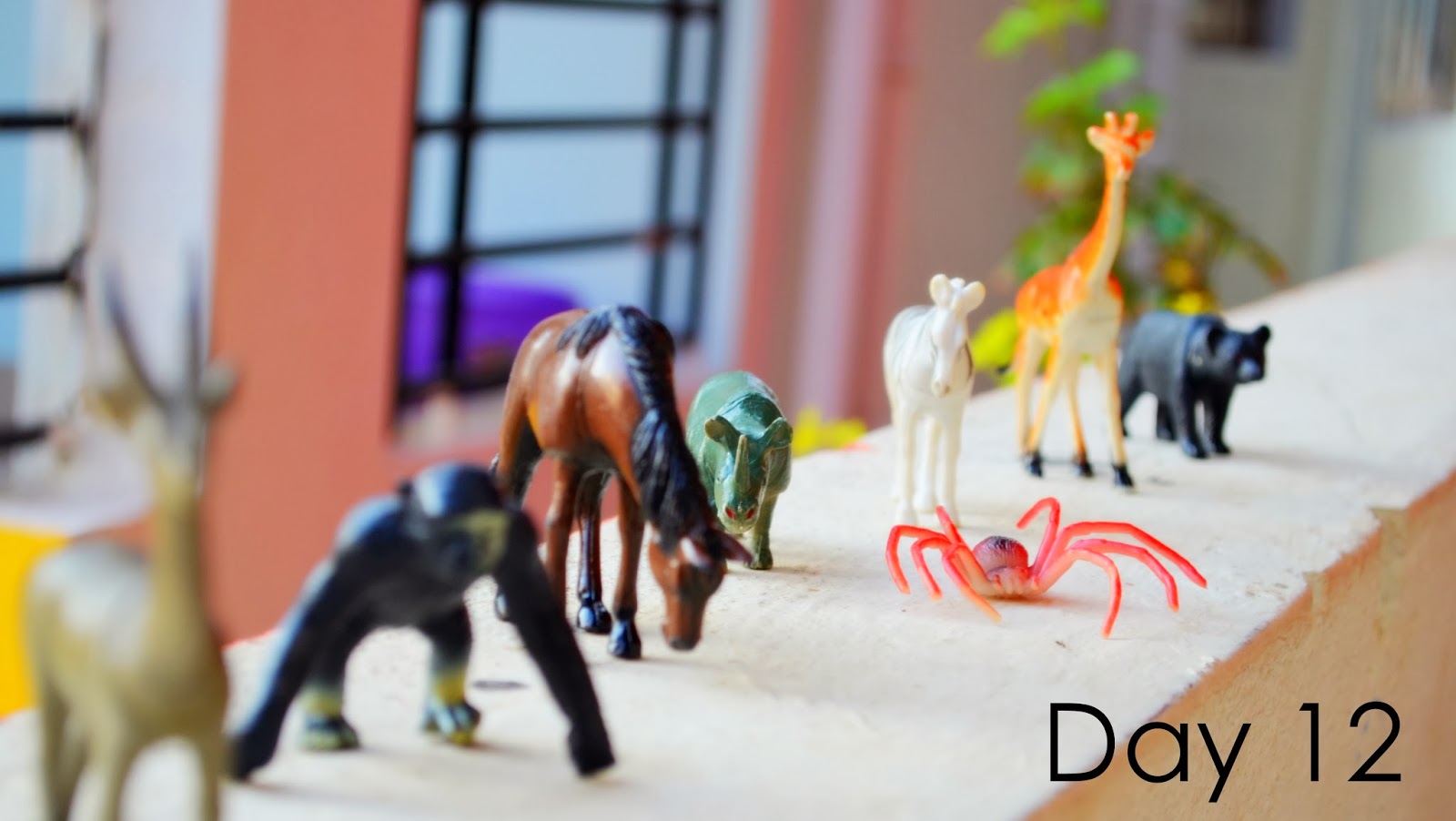 Honestly, this is not what I normally do – sit back to enjoy a sunset in Bangalore. But I wanted to have it in my list of 30 photographs. So here comes a beautiful view of the sunset from my terrace (including a bird flying back home J). 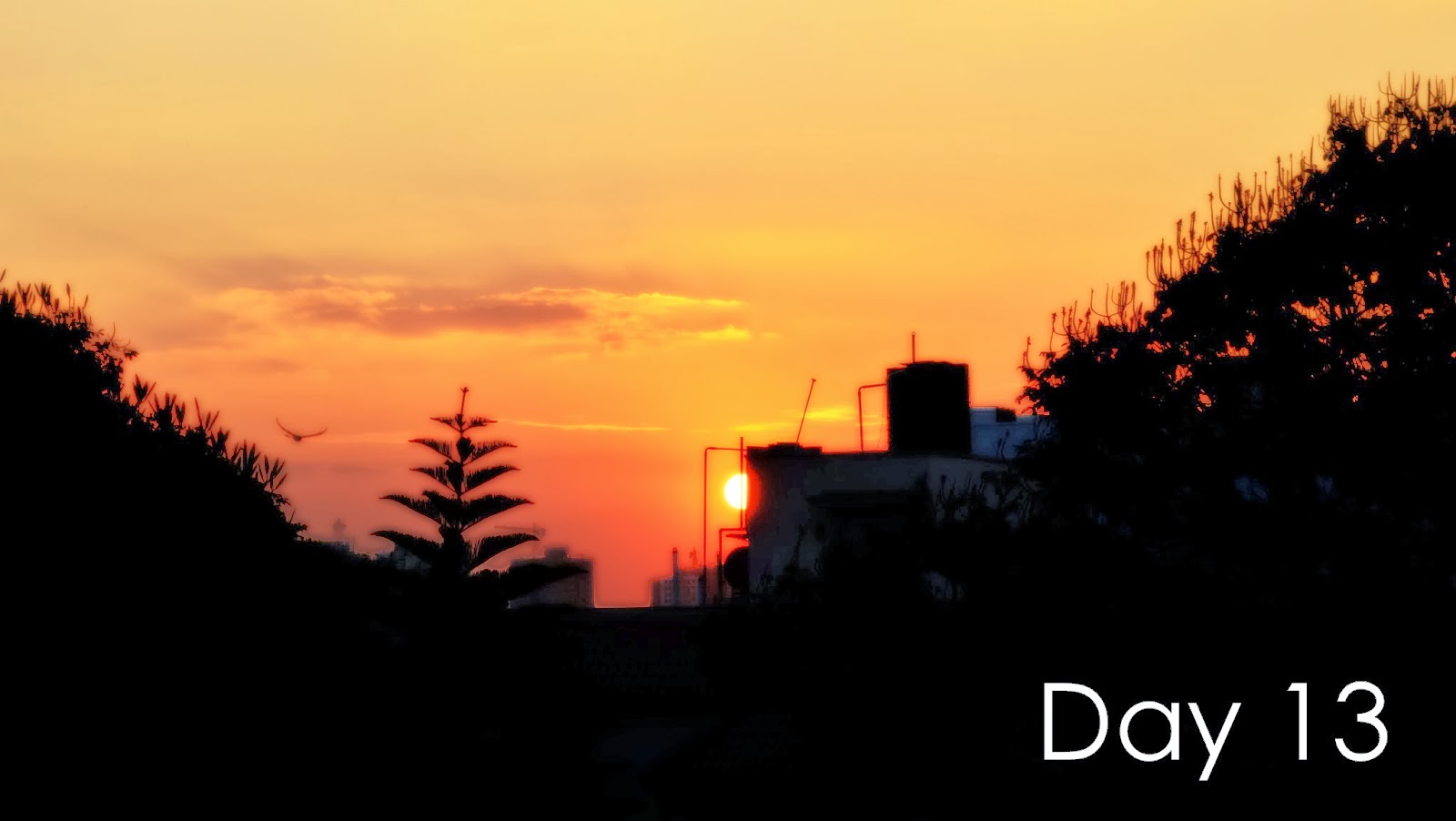 This geranium plant was nearly dying and with God’s grace somehow revived itself. Good to see it finally blooming with its beautiful bright red flowers. 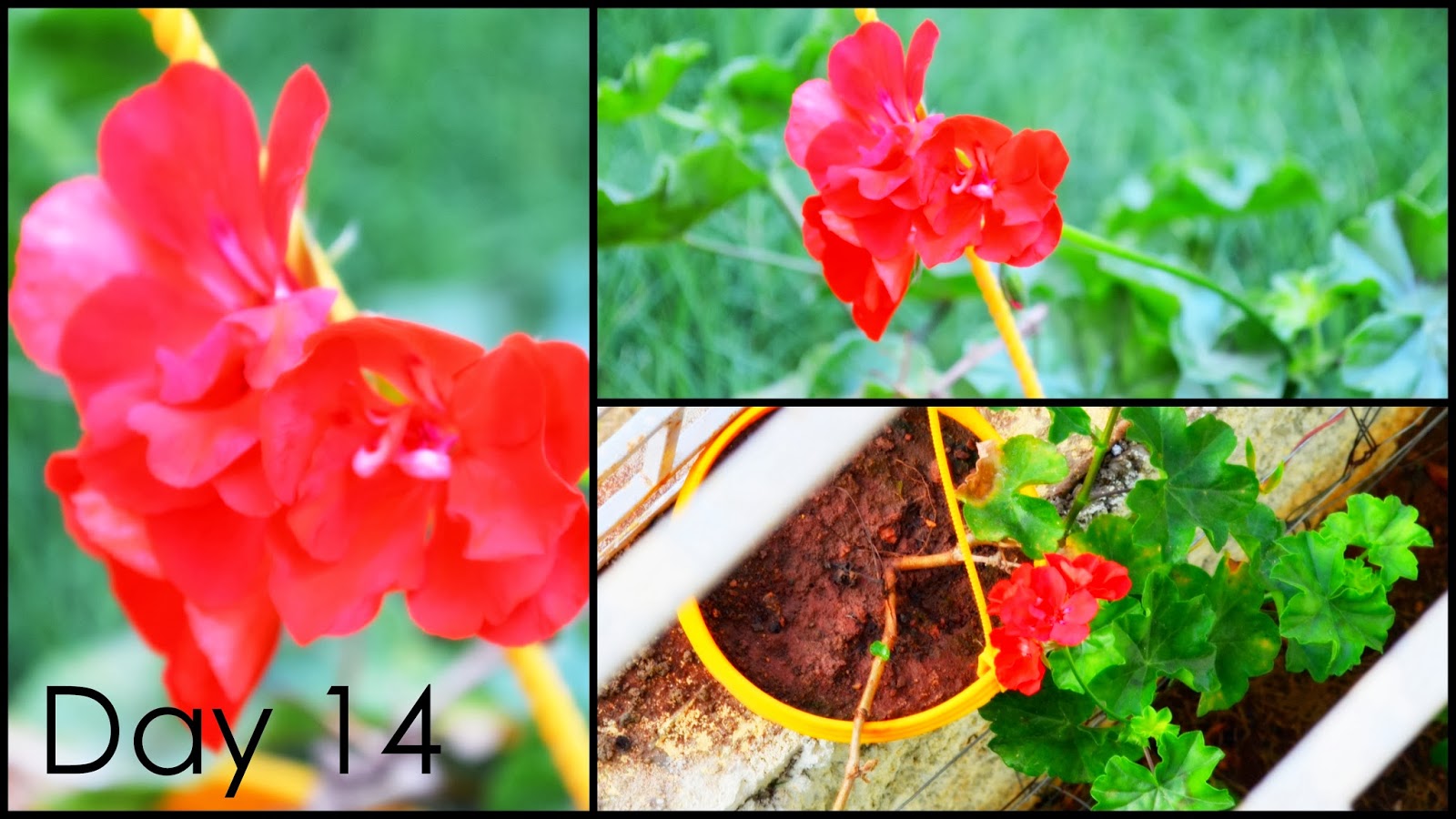 This is the same crane from day 2. The picture shows the crane still working hard late through night. The crane also got a partner J. 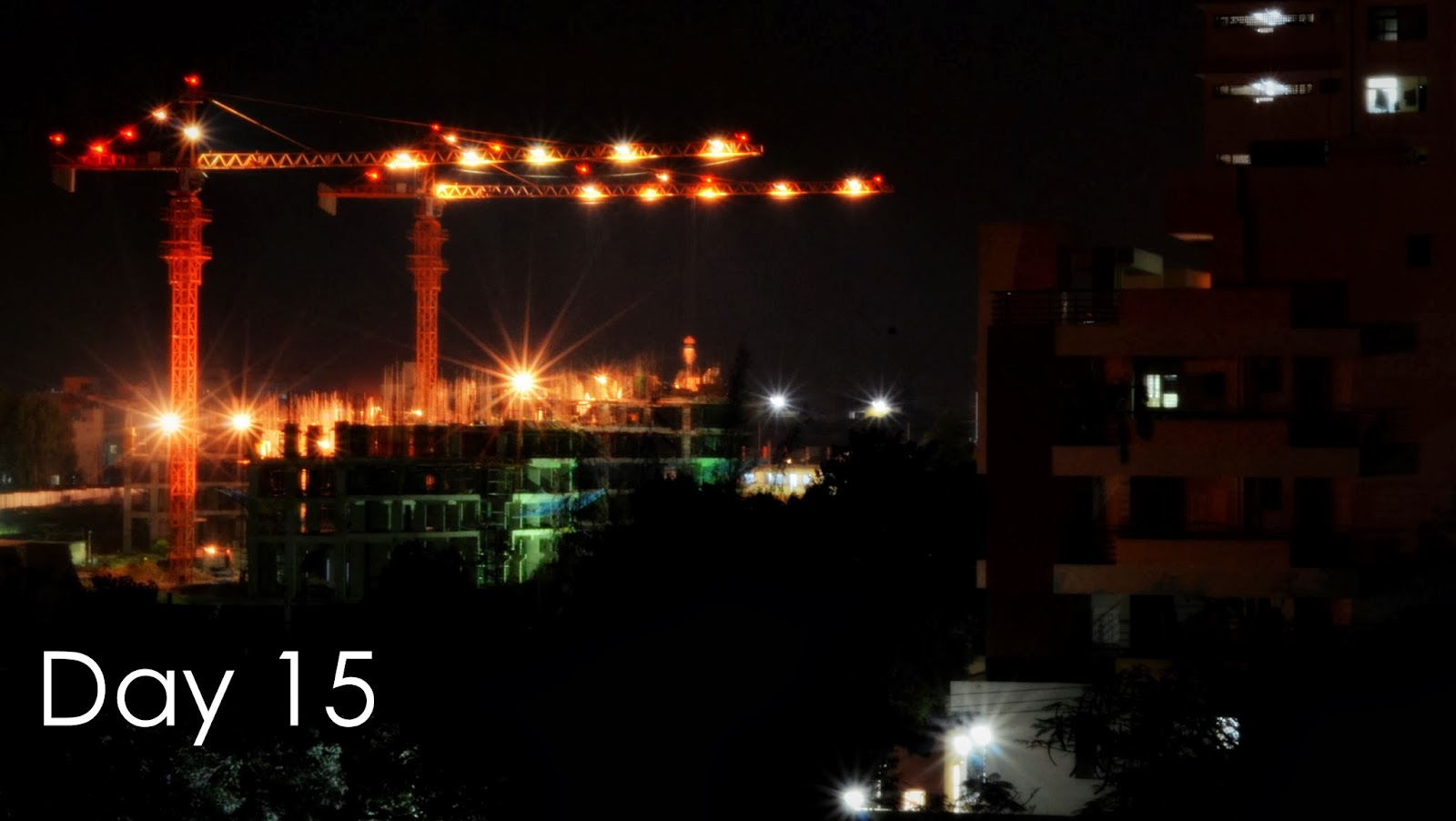 Amrita Vishwa Vidyapeetham’s Bangalore campus is just beside our layout. This picture is a night view of the college hostel in a long exposure image with few vehicles passing by through the layout. 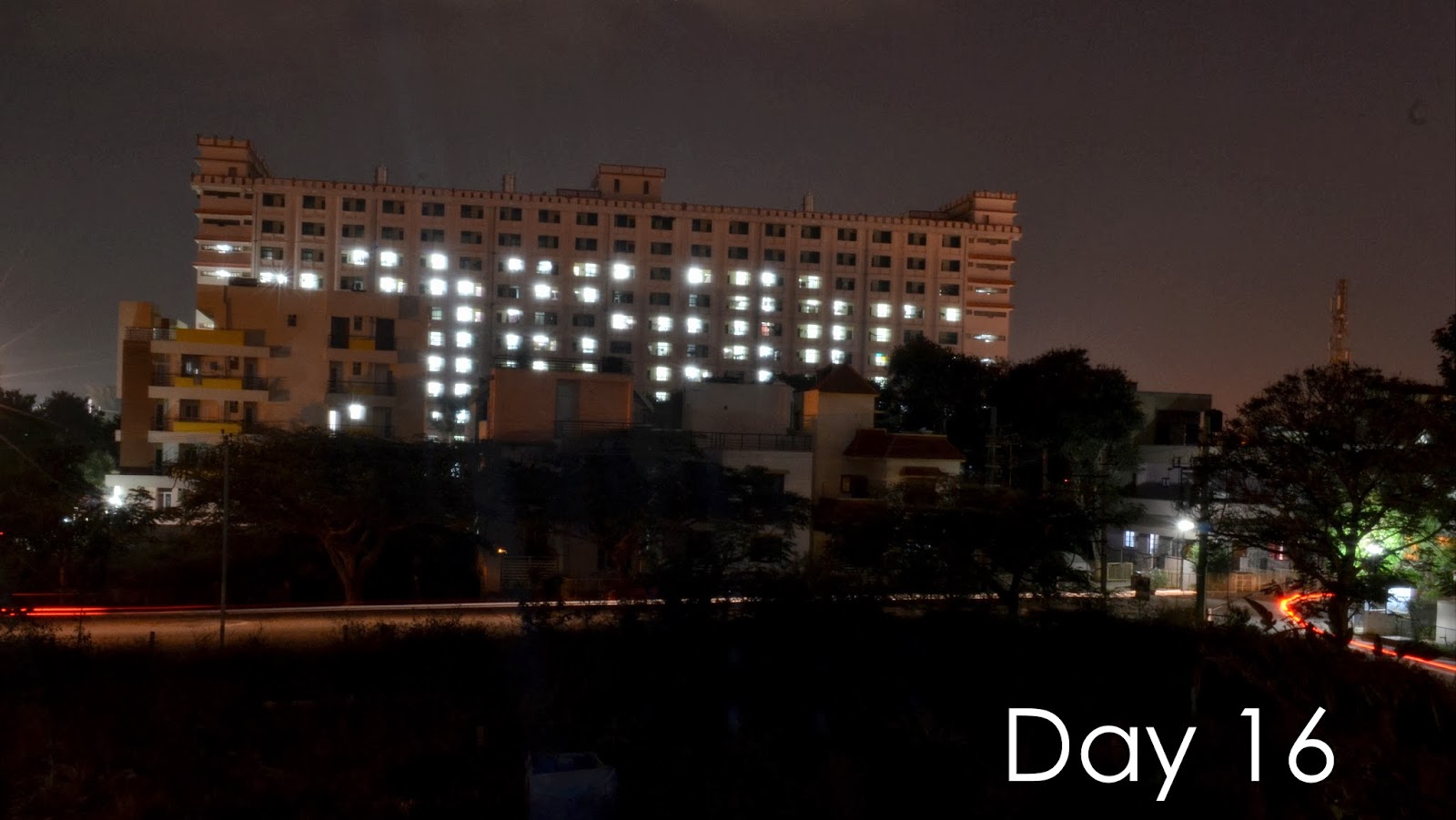 The construction workers of a nearby apartment building are being settled near my house. This picture shows the female members of the migrant workers waking up early in the morning and preparing meal for their family. 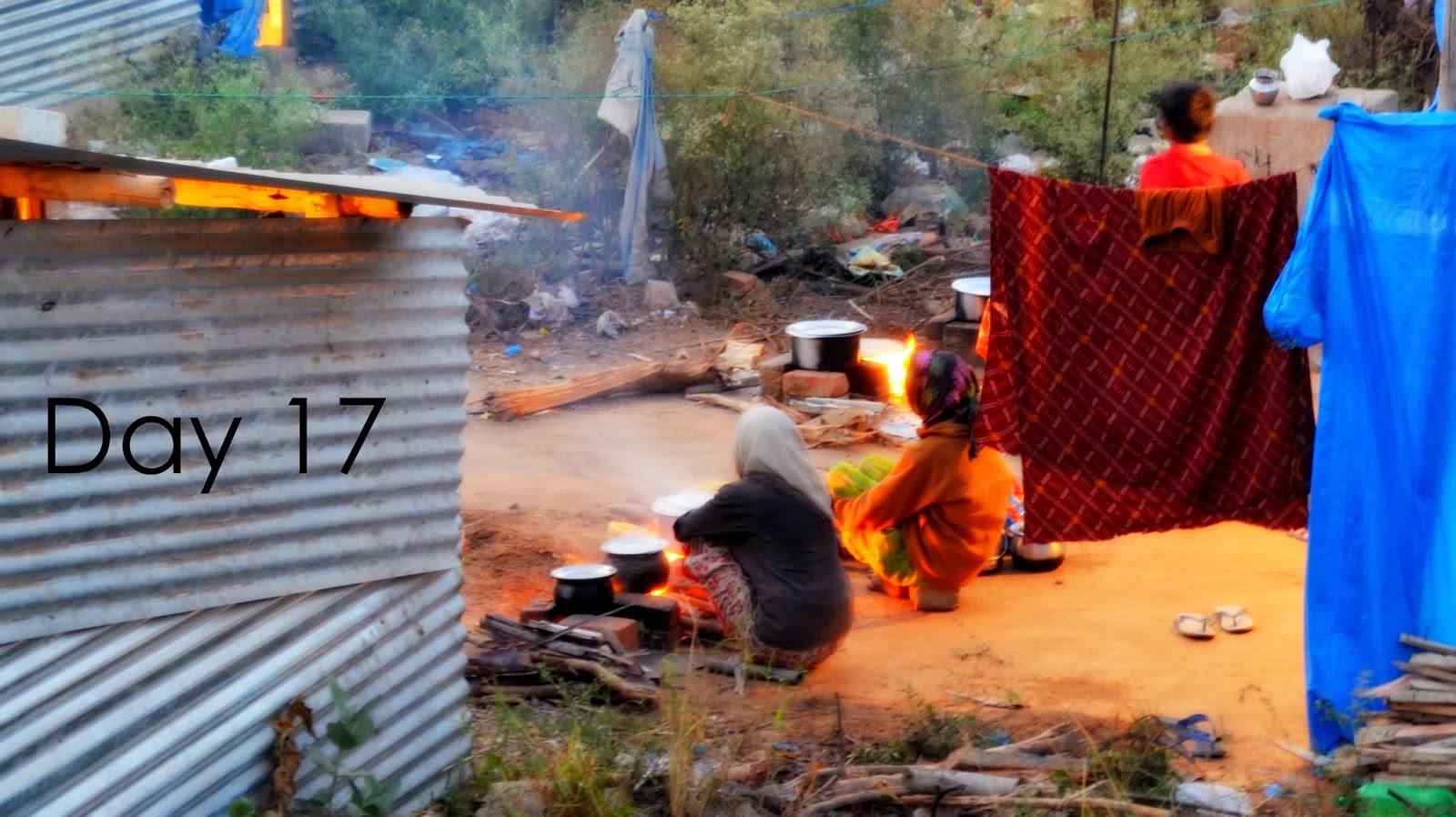 **~** HAPPY REPUBLIC DAY **~**
Celebrating the republic day with this selective color picture of a beautiful yellow rose blooming in a bright sunny day. 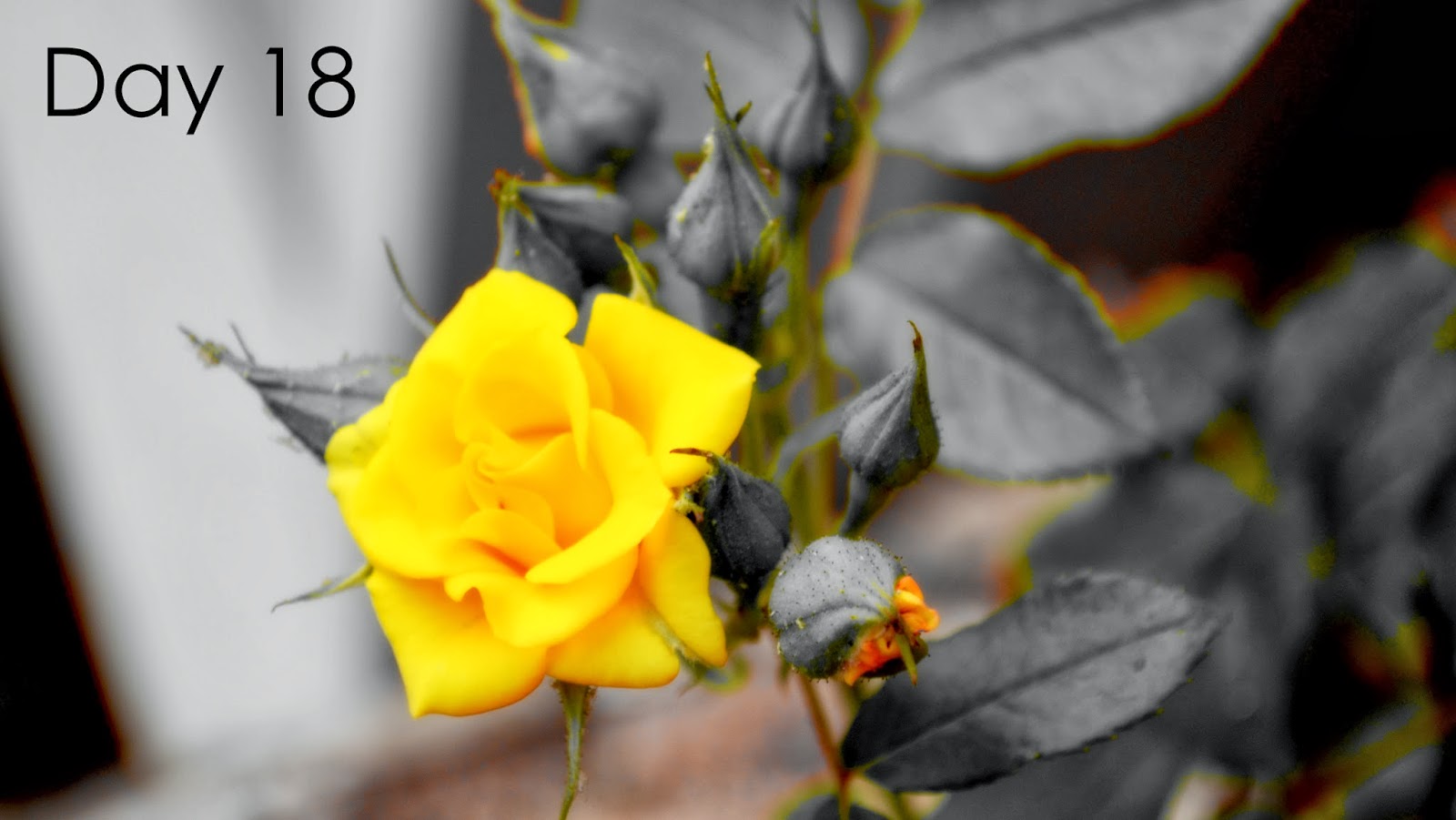 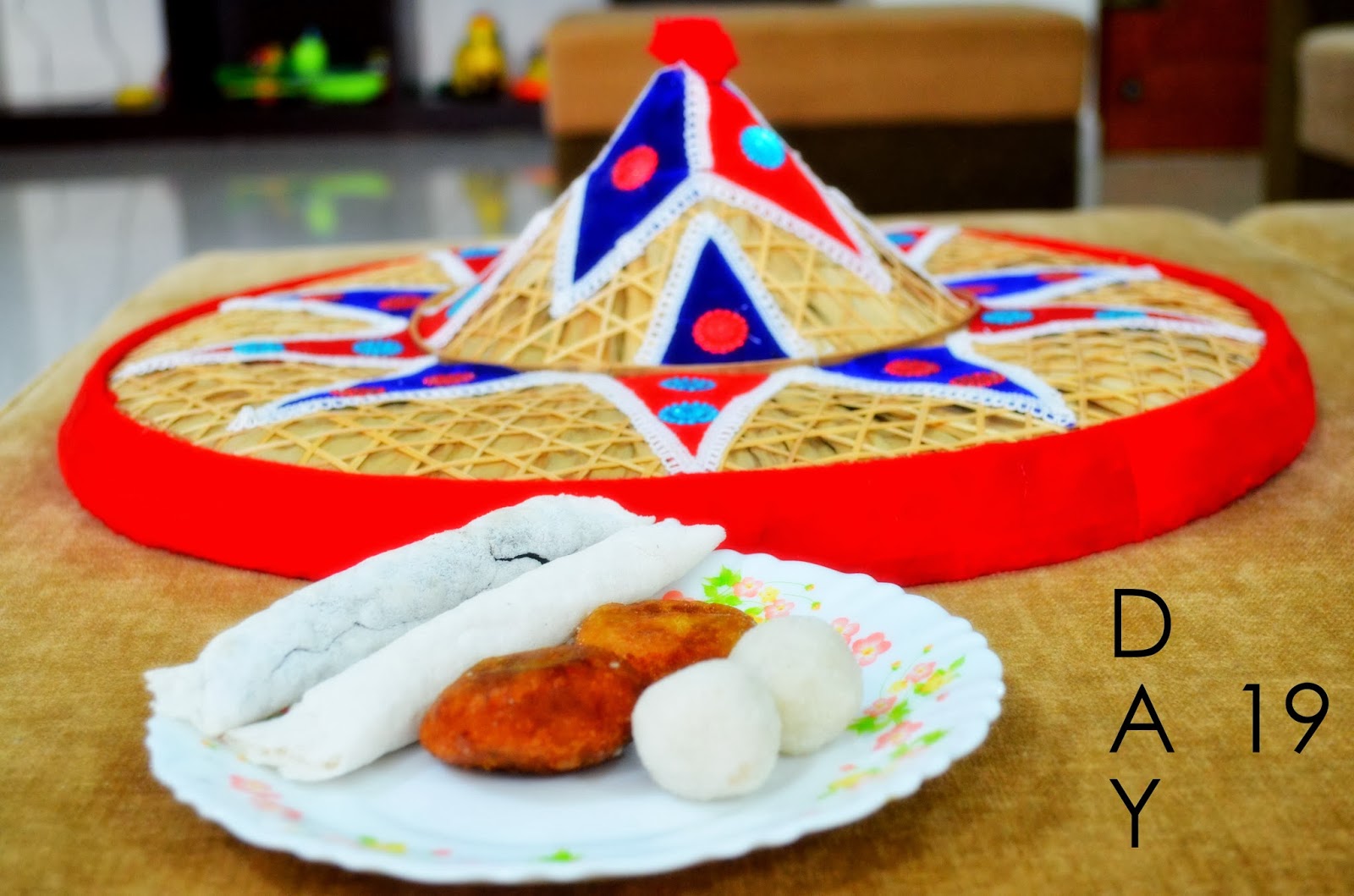 “Play of Light and Shade”. This picture shows the magnified shadow of the staircase railing projected on the walls by the night lamp. 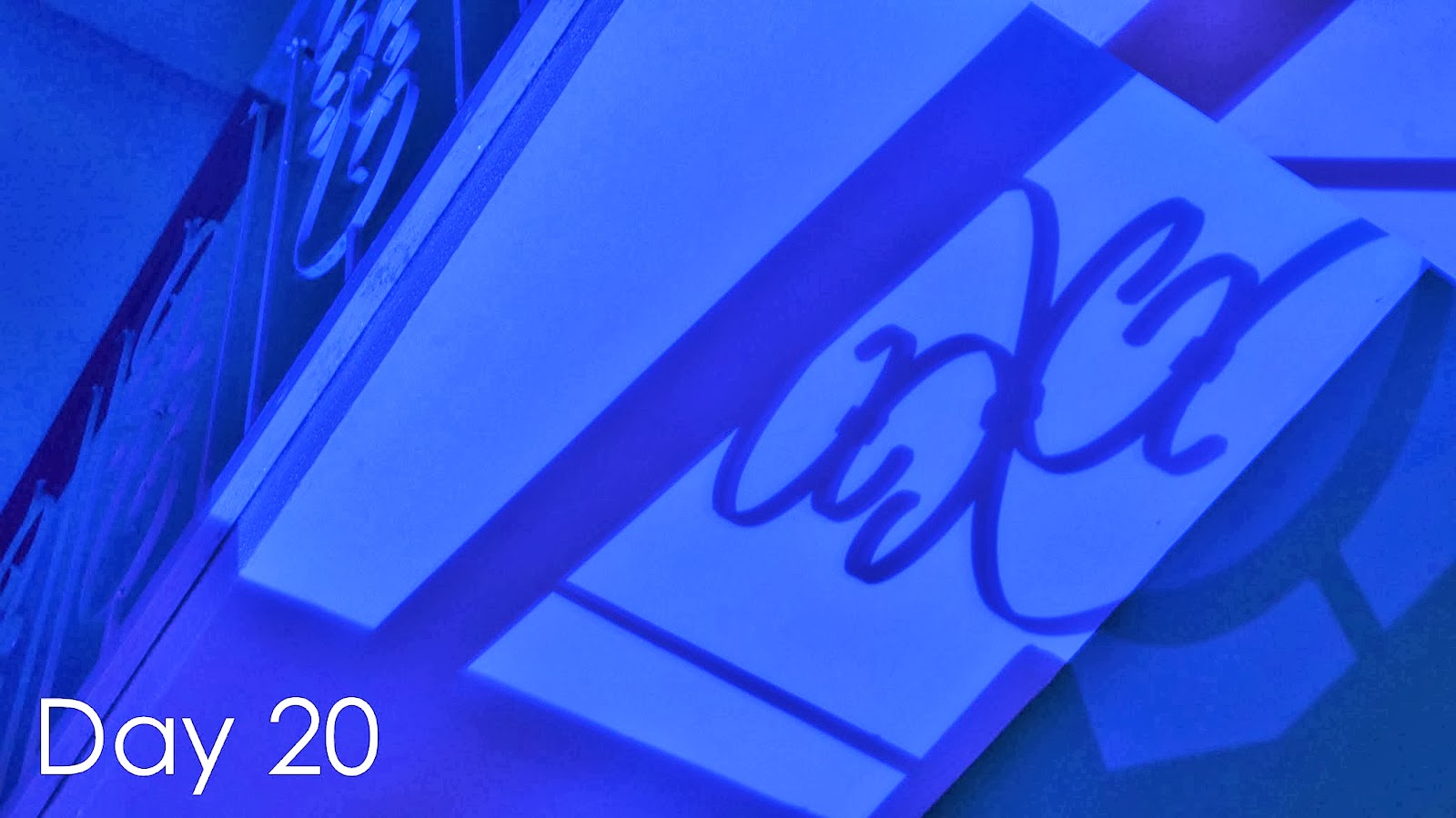 Night view of the storage space of a construction site near my house. The marble slabs block almost half the approach road (seen in picture) to my house. The ghostly figure is a person inspecting the site. 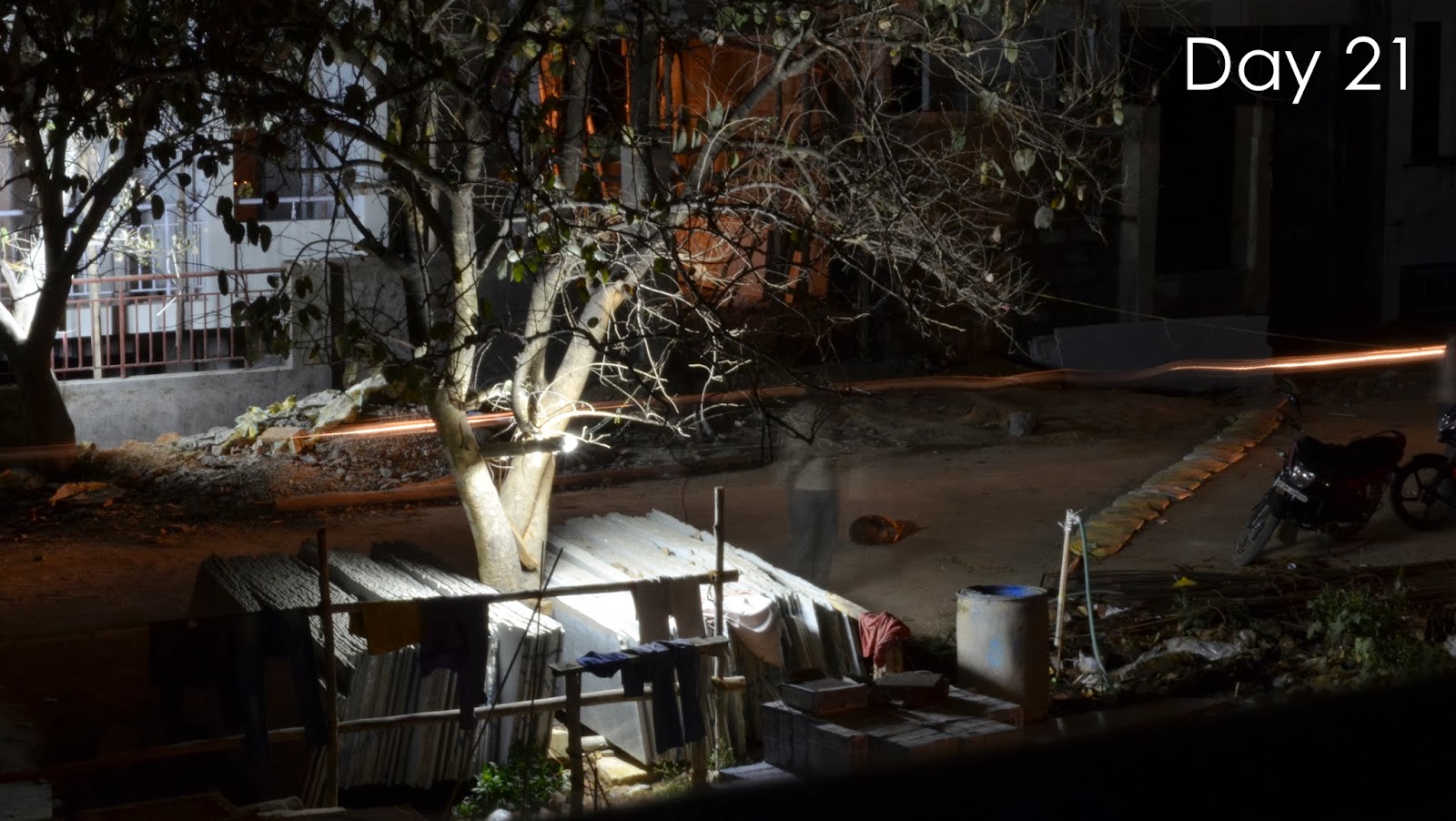 “Being Spiderman”. Can this spider bite convert me into powerful Spiderman?
“With great power comes great responsibility” J. 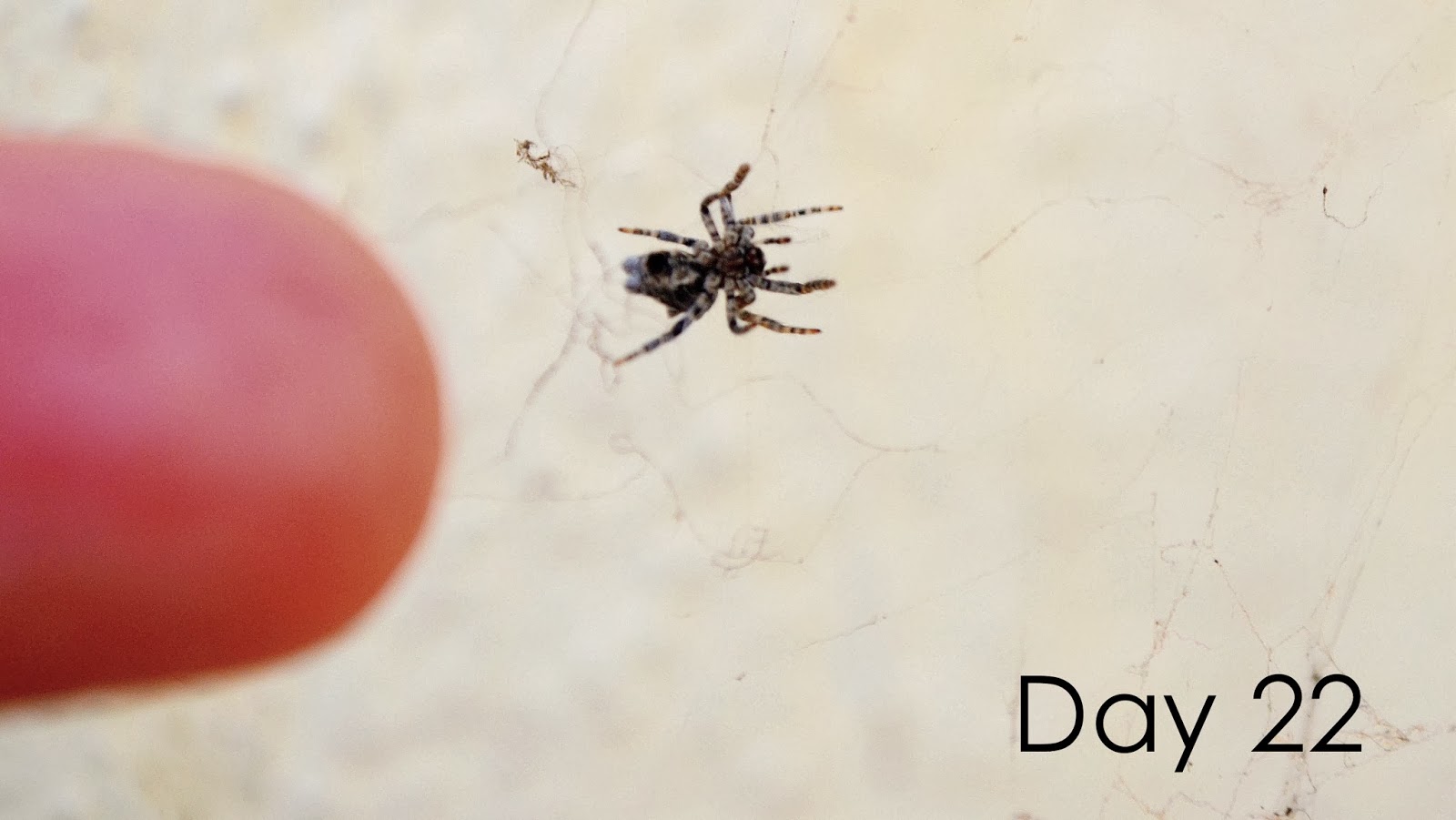 While my better half takes care of all the important stuff, I attempt to provide a helping hand to her by doing this – watering the plants J. 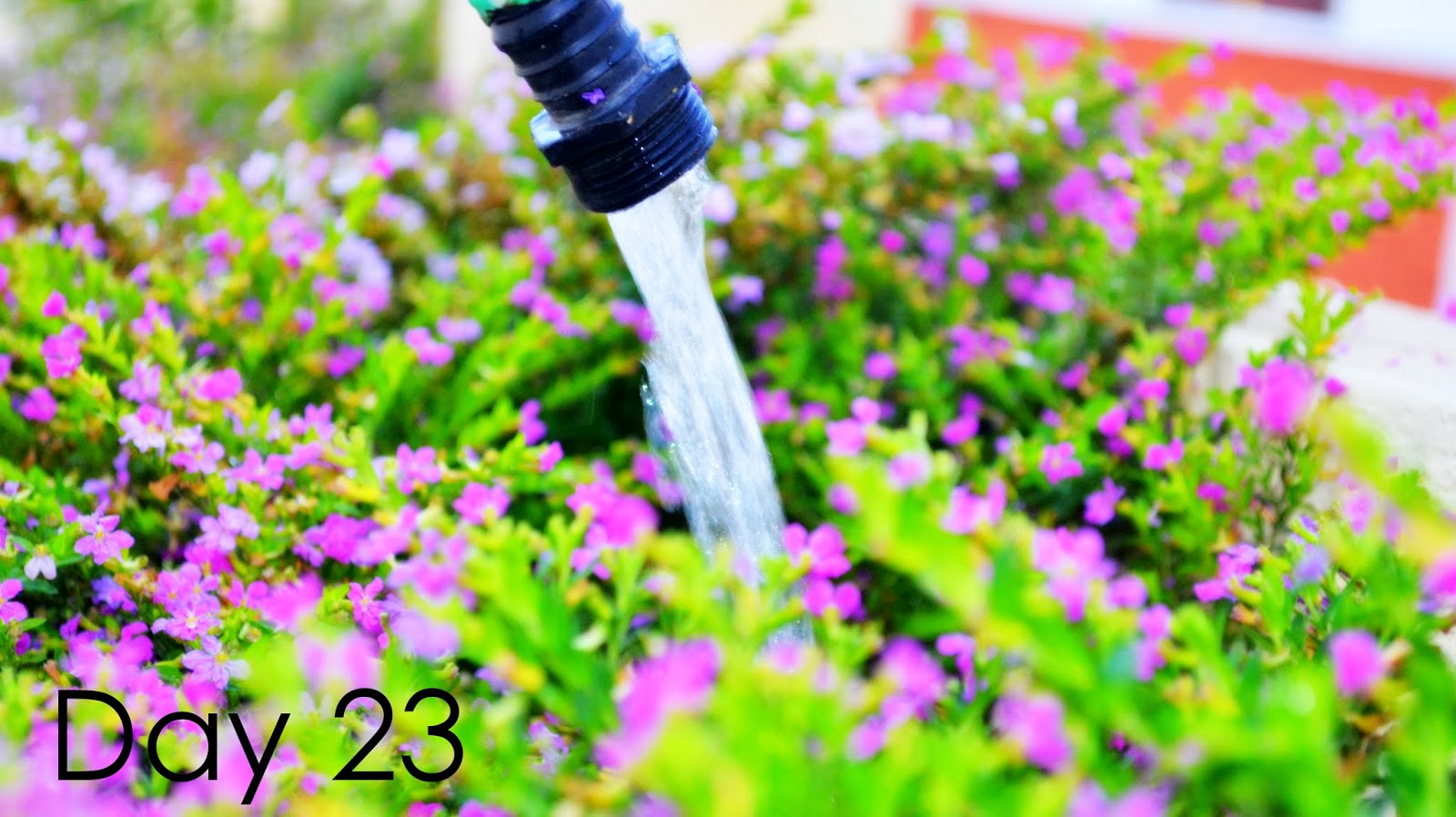 It’s a beautiful Saturday afternoon and the sky is shining bright. There are some moments when the sun plays hide-and-seek behind the clouds. This photograph is one of those moments! 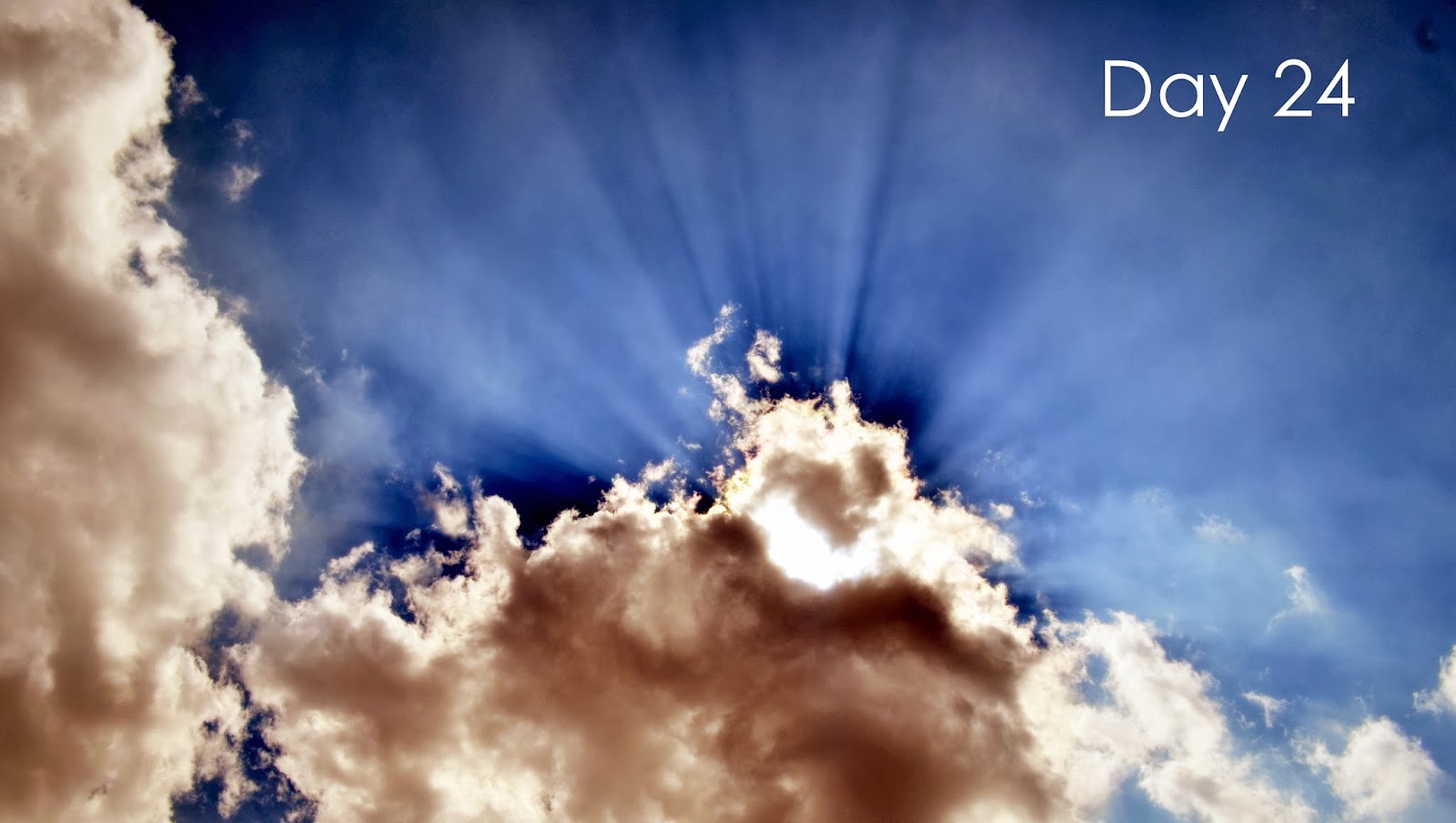 Kaikondrahalli Lake is a great story of lake conservation in Bangalore. This lake was revived through active efforts by responsible citizens. Here is a picture of a beautiful sunset as seen beside the lake. 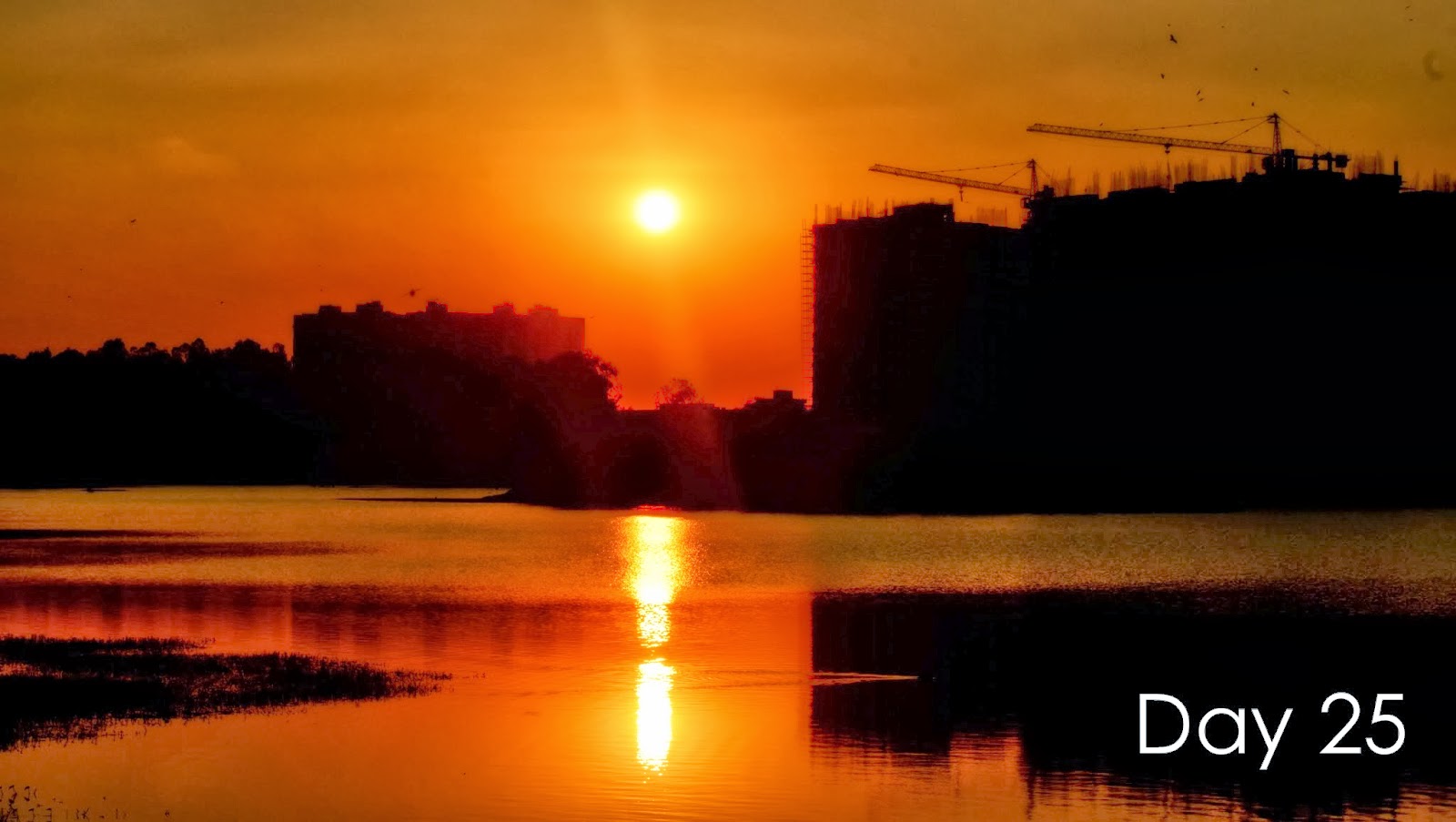 This is one of the lights purchased during this year’s Diwali. It is still hanging on our balcony and makes for a warm ambiance at times. 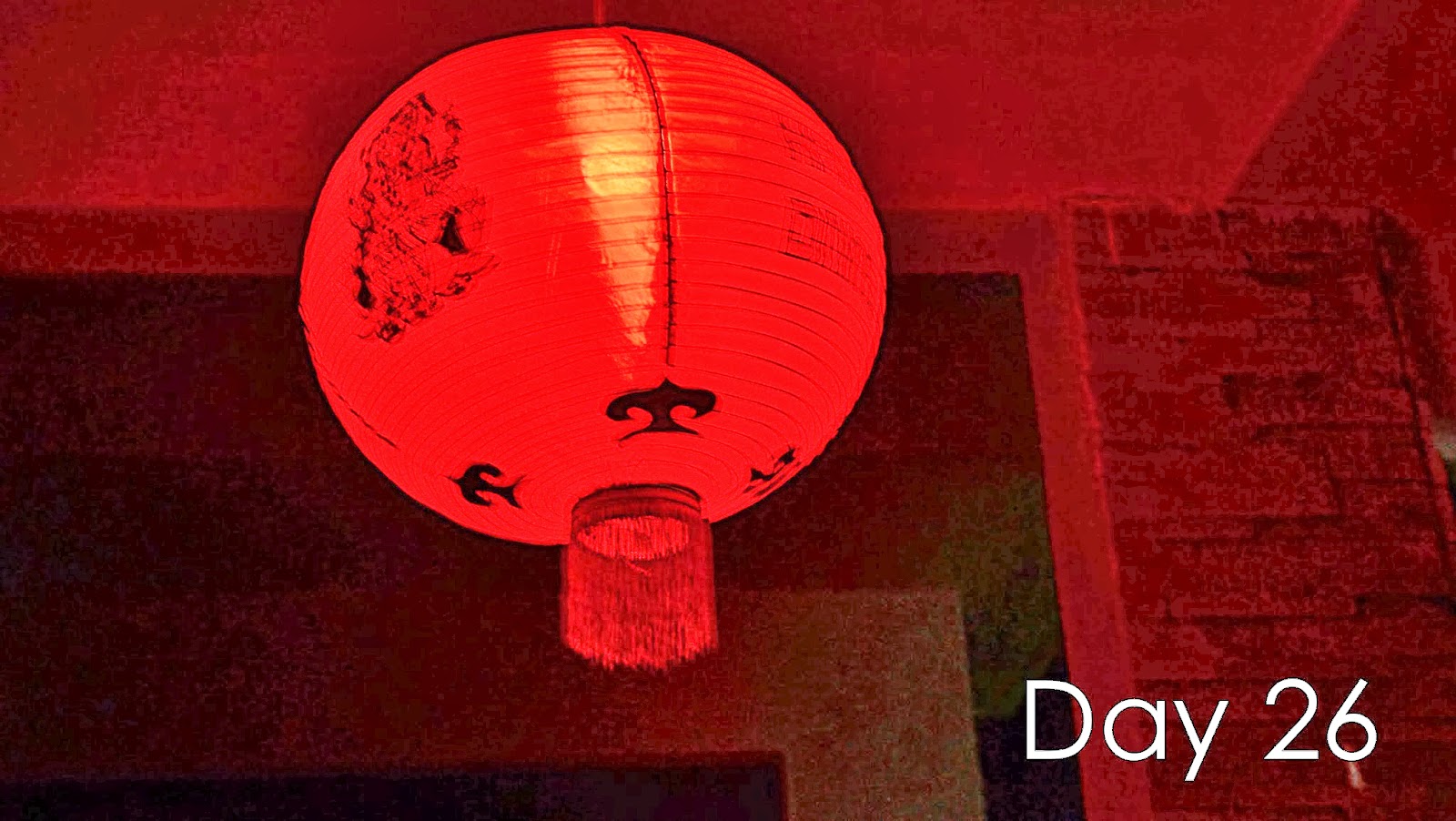 Look who came visiting today – a baby “Praying Mantis”. It is praying to grow up as a strong and successful predator. 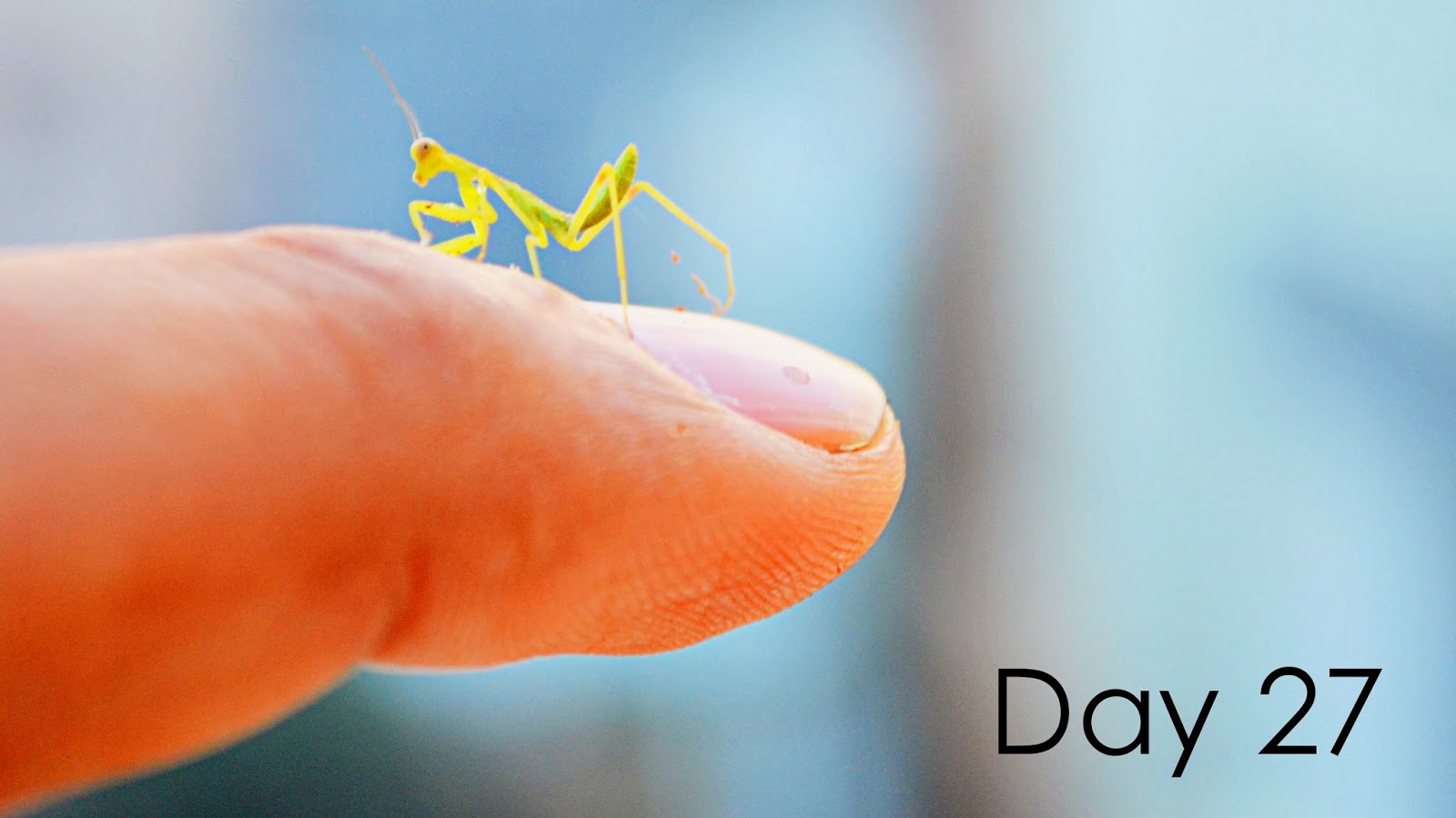 "There are two ways of spreading light: to be the candle or the mirror that reflects it." - Edith Wharton.
Lighted a candle today to feel both the darkness and the light at the same time. 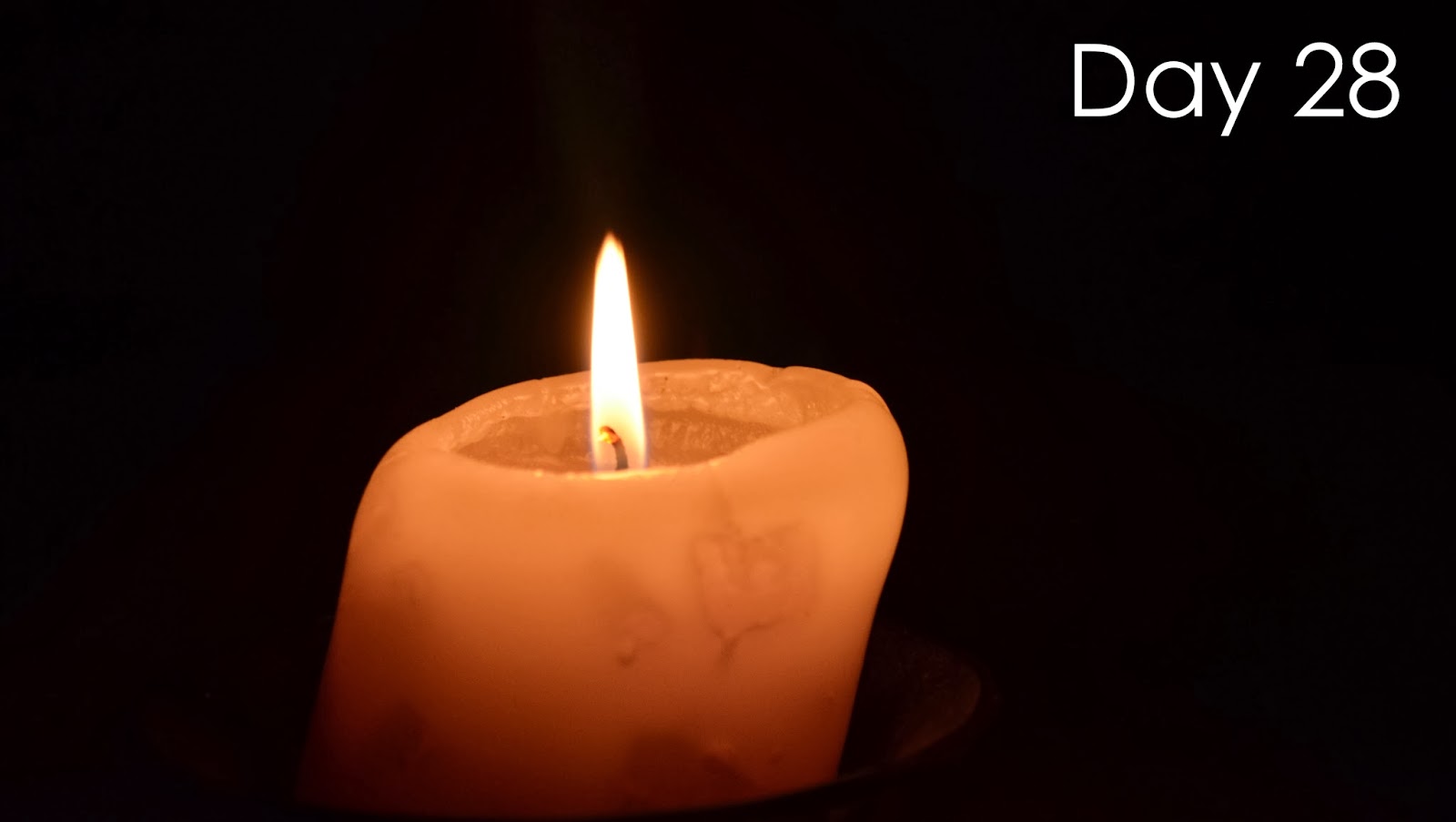 There are times when our son is deep in sleep by the time I leave for office, and we have to wait until the evening to bully each other when I am back from office. Lovely picture of our son deep in sleep and thanking my better half for helping me schedule my time. 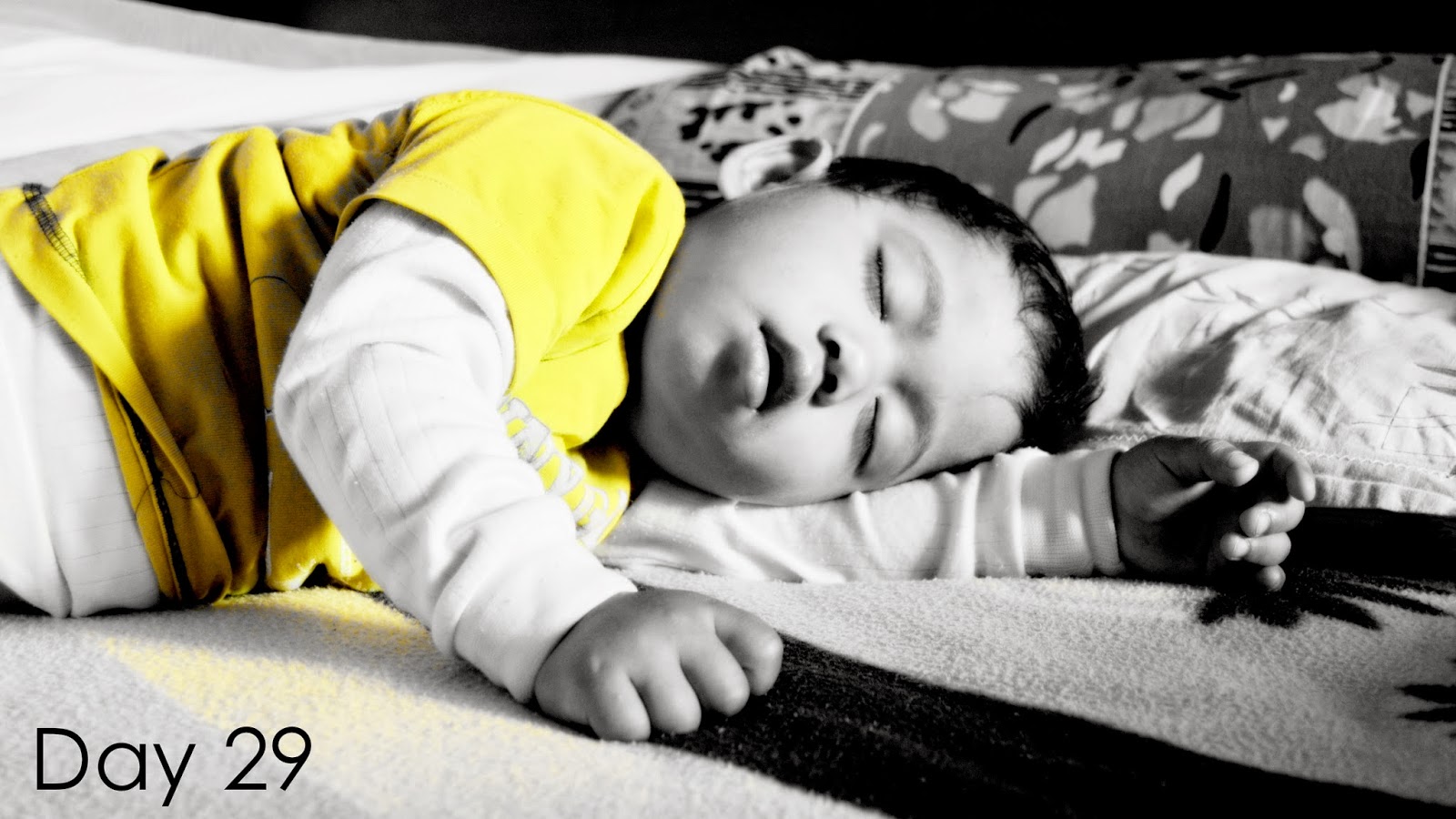 30/30 – It’s all done and time to harvest, “Quite literally actually J”.
Picture of today’s morning harvest of home grown tomatoes… 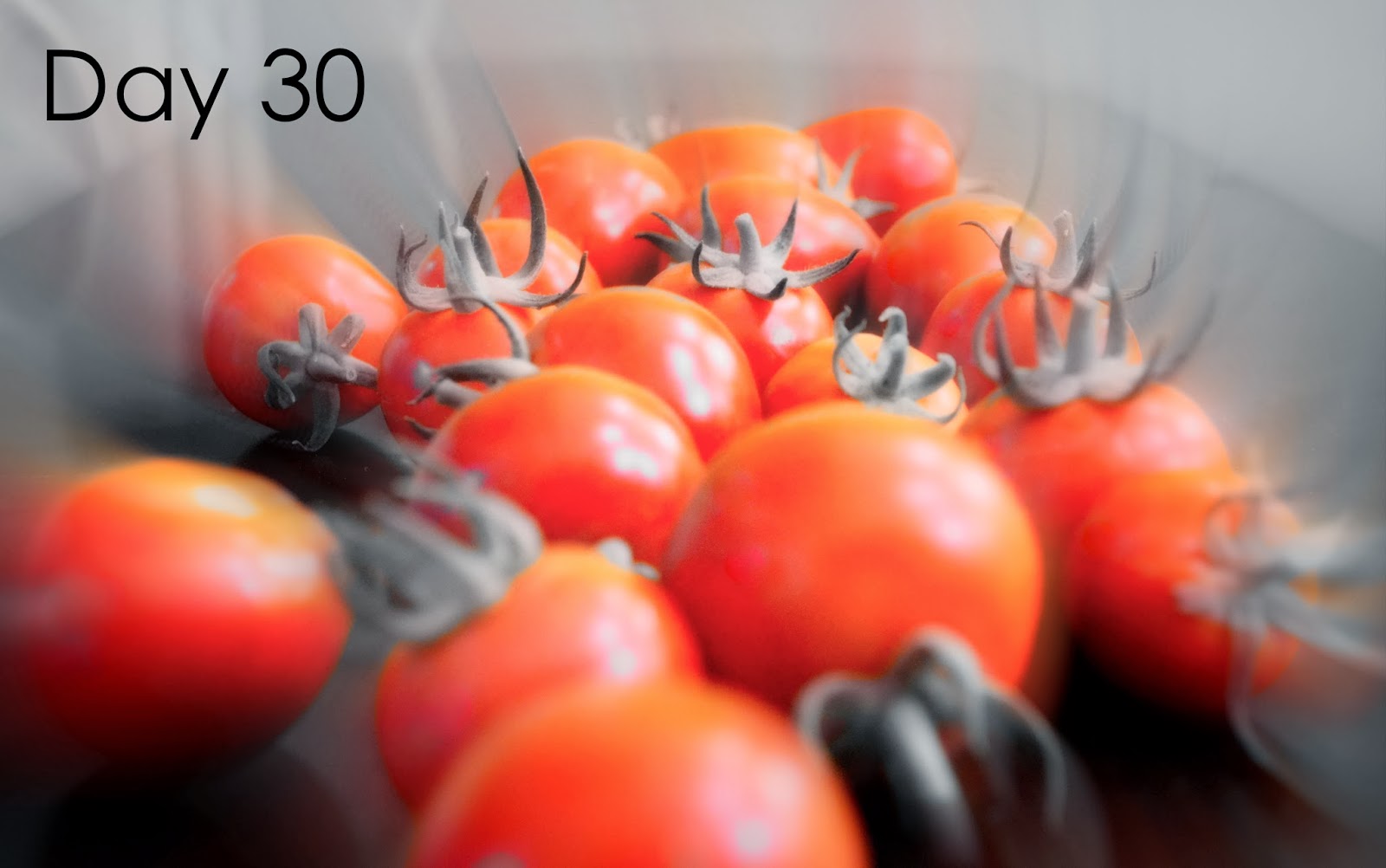 Posted by Atanu at 2:31 PM 3 comments: Links to this post