I first came to Bangalore in 2000 for my summer internship in NAL. Bangalore was new to me and I had tough time initially figuring out directions to roam about. I stayed in CV Raman Nagar and take to take the early morning bus down to NAL in Airport road. We then take the NAL shuttle bus through wind tunnel road to the NAL R&D campus.

Now my first impression when I saw the wind tunnel road was, probably the places beyond it when we go by the airport road is city outskirts and nothing really existed. (I really didn’t know about the existence of Marathalli at that time). This impression mainly came because of the lean traffic I saw on that road. After almost a month I knew about the existence of Kemp Fort, which is just walking distance away from wind tunnel road. In my last days I started exploring places near Kemp Fort. One of my fellow trainee told me about a place called Marathalli he stays, which is a good small place. I went back with a very good impression, awesome weather, easy going peoples and fun place to be in. I wanted to be back here for my job, if given a chance.

Come 2003, I finished my Master’s and got a job in Bangalore. Really felt good to be back, with older memories coming back. This was quite a different place what I have seen when I left last time. More peoples, looked more developed, many more peoples probably working. Being posted in Whitefield, I got a chance to explore places beyond Marathalli J. I stayed in Indiranagar and it took me around 25 minutes to reach office, sometimes later. Comfortably took my 8:30 am bus to reach office before 9:00 am. Things were quite normal for a year when things changed. It started to take more time to get to office (courtesy the famous Marathalli bridge). My house owner in Indiranagar wanted me to move out, as it seems the house rent has suddenly increased quite a bit. We had to move to Airport road. It suddenly became common to reach office at 9:15 and later. Before I can really adjust “psychologically” traffic has started becoming unbearable in the bridge. I actually started getting headache by the time I reach office. It might be road rage, but all the vehicles just SHOUT’S WITH THEIR HORN for just no reasons.

One fine day, I was just so happy to see a board. A bridge is planned to build in place of the current TORTURE bridge at Marathalli. In just 4 months (as per as I remember it was supposed to be over by 2006 September), we will be having a 6-lane road. I felt like I was daydreaming. But anyway traffic was diverted via the inner ring road, touching down the old-Madras road. The distance was longer (but believe me, it took less time to reach office). I wasn’t complaining, as its just some months of compromise and we will cruise through a highway, WOW.

OK, too much daydreaming J, today is September of 2007, and I am still awaiting my dream bridge. I just don’t know how much more time it would take. Traffic woes still continues, car’s still SHOUTS. And when it rains, it takes me 2 hours to cover the 12 kms distance from my office to home.

Today I saw the marathalli bridge opened. May be it was opened over the weekend.

Posted by Atanu at 8:27 PM No comments: Links to this post 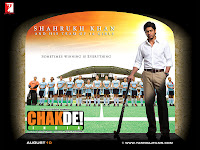 The recently released movie Chak-de-India has created a new word in the Indian subcontinent. Chak-de-***. In-fact chakde has been used (or shall I say exploited) by us to fit into any possible topic we can.

Well the most obvious choice to start off with is definitely hockey. Chak-De-India song has been translated by media into the national anthem of Indian hockey.

Movies has been historically a very strong medium to influence common public in India. I do feel really happy about the kind of publicity/awareness it created for a sports like hockey in this cricket crazy nation. Demand for hockey stick's tripled, and this is actually a good sign for this sports.

But things went beyond what I might have thought when the movie is seen as an inpiration to every things in our life. It gradually translated to chak-de India for Indian cricket team's victories and also to chak-de India for the booming stock market, and also connected with the Indian football teams good recent performance. Any good new's can now be related with the feel good factor depicted in the movie.

Chak-De girls have in fact become good brand ambassadors to women empowerment. They are seen hopping TV channels talking about it.

The timing of the movie was also well planned, with Indian Independence round the corner; national sentiment was at its high. India’s women hockey team made some good performances, and so did the men’s team. So chak-de was seen as a revolutionary movie with its after effects bringing motivation and good fortunes to India.

Whatever may be the case, its too much of chak-de now. Lets not try to connect everything to chak-de and lets move ahead.

Posted by Atanu at 7:31 PM No comments: Links to this post