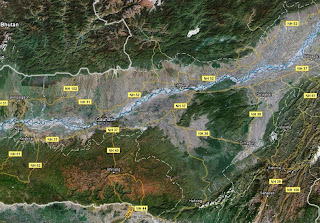 Assam is blessed with the great river Brahmaputra which passes through its heart, essentially bisecting through it. Brahmaputra and its tributaries is the largest source of water for Assam. The magnitude of its size can be judged from the fact that in some places the river is as wide as 10 kms. Though it is the lifeline for Assamese people, it is also known for the destruction it causes every year by floods.

Flood and Assam has always been in sync with each other. Come monsoon season and flood reaches its dangerous levels with widespread destruction. Every year huge destruction in agriculture, livestock and property happens. 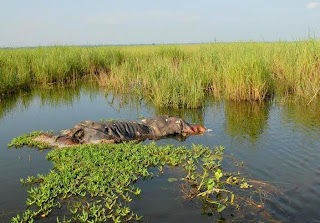 The destruction caused by flood is not only limited to humans alone. Kaziranga, the natinal wildlife sanctuary in Assam which is famous for it's one horned rhino, gets almost completely submerged during floods. The animals are bound to move to higher grounds for safe heavens, making them vulnerable to poarchers. Local population around Kaziranga provides helping hands during these tough times. Every year many animals are drowned, some of which are part of the endangered species (like the rhino). The image shows an rhino carcass. Here is a news article on recent flood havoc in Kaziranga.
http://economictimes.indiatimes.com/PoliticsNation/Kaziranga_submerged_animals_flee/articleshow/3432012.cms
Unfortunately there has been very minimal effort by the state as well as the Indian government to properly tackle this disaster. Flood has been part of Assam's calender for centuries, but the kind of protection and preventive measures as well as preparedness that was expected out of the government is dissapointing. Every year lakhs of peoples goes homeless and crops destroyed, but the embankments built in has to be rebuild. The following link discusses it in greater detail: http://www.dayafterindia.com/august1/assam.html
There has been constant criticism of the central government for its step-motherly treatment of Asaam. Flood relief efforts being one of them.
http://www.nenanews.com/NEE%20July%2022-Aug.6,%2003/Cover%20Story.htm
http://www.asiantribune.com/?q=node/13437
There has been a regular effort by various organizations to influence central government to declare the floods of Assam as a "National Disaster".http://qasmi.sulekha.com/blog/post/2007/09/flood-in-assam-isn-t-it-a-national-disaster.htm All said and done, there has to be an serious effort from everyone in the state and the centre to seek an longer term solution to this problem. When we know its going to happen, why not prepare for it and try to reduce the disaster to a minimum.
Looking into the scale of the Brahmaputra, this must sound like an herculean task. I don't want to be philosophical but, "when there is a will, there is a way". And I want to see the will in the concerned people to make an effort in this regard. Until then, the people of Assam has to bear the wrath of the mighty Brahmaputra.
Posted by Atanu at 8:00 AM