I had to travel to Mumbai for my personal work on 23rd of May 2008. It had already been announced that BIAL will flag-off the same day. I had to catch a 3:30 pm flight. So I planned to work for the first half of the day in office. At the back of my mind, all the uncertainty involved with the travel time kept me worried as this was the first day of airport opening and there were no data to tell me the exact time it would take for me to reach the airport. The best I could do was to plan to leave office at the earliest.

Call it my luck, due to elections; the opening was postponed by a day to 24th of May, and I comfortably spent the first half of my day in office. The HAL airport is just walking distance from my house, and I took my Kingfisher flight to land in Mumbai.

I had my return flight on Sunday, 25th May. I knew BIAL has already started its service, and prepared myself mentally for the long trip back home. This is the first time I properly looked at the Mumbai airport. It looked beautiful. Lot of work is still going in one of the terminal and construction workers were spread around at the terminal with their machinery and equipments. I looked for the terminal from where the Kingfisher (KF) flights takes off. I figured out the auto dropped me at the first terminal and I had to walk down to other end of the airport. The KF terminal is at an unbelievable location and reaching there was a real adventure: passing under overhead construction workers, walking up staircases to the second floor and asking multiple peoples. The KF flight was delayed by 1 hour and finally reached Bangalore by 11:10 pm night.

I peeped out of the aircraft window to get a first glimpse at the new airport. To be honest it looked really impressive and huge, compared to its old HAL veteran. But soon all my enthusiasm vanished as we waited more then 10 minutes with the aircraft door still closed. This delay after reaching late to Bangalore was annoying. An naturally embarrassed flight captain announced “we no more control the disembark ladder. Its been controlled by BIAL and they has been informed about the requirement”. This was the sign that BIAL is still learning to manage its resources in the second day of its service. Finally the ladder came and we were out of the aircraft. The Volvo bus took us to the terminal building. I guess it was a rare mistake; the driver dropped us at the wrong door. Everything was closed and whole team was struggling to find their way out as everything was closed :-) We saw other busses dropping passengers further down, and we started walking to the other door. To be frank I was quite frustrated after all the delays and the mess, and others looked frustrated too.. 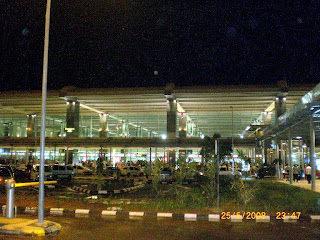 After entering through the door, got the first glimpse of the new terminal building. The space is not that big, but naturally spacious compared to its veteran. There were LCD

panels all around displaying adds. The overhead LCD screens displayed the baggage claim details with belt no for each flight that landed at that time. I just had my hand baggage, so I won’t be able to comment on the efficiency of the baggage claim system. I directly walked towards the exit of the airport. The directions were nicely marked at all locations visibly illuminated. I followed the direction that said Bus, which lead me to the exit. There was a helpdesk right there where I enquired about the bus service. They guided me to the bus stop, which is located right outside the airport, and it can be seen even from inside. Walked down to the bus stop. When I looked back, got the full view of the illuminated BIAL terminal. It looked really great. Outside the airport there was sufficient space for parking for vehicles, each locations clearly marked. The bus conductors were calling for passengers for their respective routes. I enquired about the HAL airport route and I was guided to the route # 4 bus. It’s the same Volvo that plies in the city. The front seats were replaced with luggage compartments for ease of luggage transport. I paid rs. 150/- for the ticket. The bus started it journey at 12:00 at midnight with the bus filled with passengers. 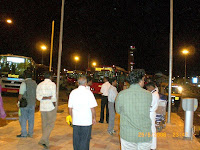 The bus left the airport to hit the highway. The infrastructure outside looked awesome. The roads leading to the airport has been really well built, and may be because it being the second day of operation, the whole road leading to the airport is beautifully illuminated. Felt like moving out from a real international airport. The Volvo bus took to its full steam, and roads were quite empty at that hour at the night. Saw the cabs from the “Meru & Easy Cabs” the official taxi service for BIAL. It looked cool with its ash color and big taxi sign illuminated at its top. The cabs were mahindra logan vehicles. The bus traveled without any traffic interruption, something I have never experienced in Bangalore :-) It was funny that roads got worsened when it entered the city, and I got the feeling how bad Bangalore infrastructure is. The bus took the bellary road, old madrass road and finally hit Indiranagar and then airport road. When I was dropped at my place in front of erstwhile Kemp Fort, I quickly looked at my watch. It was 1:00 am at night. I believe this is the minimum time I would take to reach home, as there were hardly any traffic and the bus was at its full steam. I might have to get a more practical estimate of the travel time, as today travel was quite an ideal one. I guess, at least one and half hours looked practical. The same time will apply for reaching the airport also. I would ask people to keep 2 hours for airport travel to be on the safer side.

Things that worried me the most, the airport travel looked smooth: courtesy BMTC. Besides the operational hiccups in the new airport (they will improve that with some days of service), the overall experience was very satisfying. Only pain was the drastic increase in the travel time, but I guess I will start getting benefit of reduced traffic on the airport road from now on.